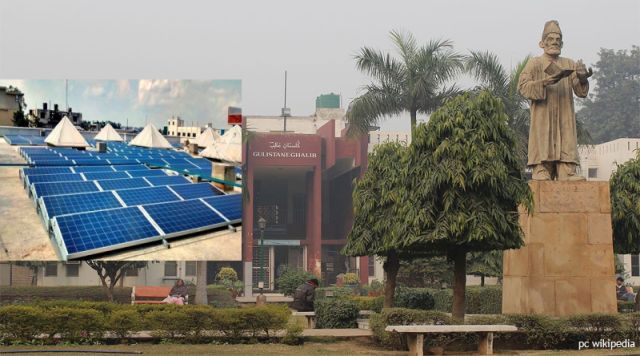 New Delhi : Solar solutions provider SunSource Energy said on Tuesday that it is on course to set up a 2.5MW solar rooftop plant at Delhi’s Jamia Millia Islamia University, by the end of June 2018.

In a statement, the Noida-based SunSource said the plant would help the university save around Rs 1 crore in energy costs per year.

“Jamia Millia recently signed an MoU with SunSource (which in turn was approved by the Solar Energy Corporation of India) to execute the project on a turnkey basis for the next quarter of a century under the Renewable Energy Service Company model (RESCO).

The installation of solar panels on over 50 rooftops of various buildings like central library, colleges and departments of Jamia and the hostels had already started, it added.

Commenting on the developnment, university Vice-Chancellor Talat Ahmed said in a statement: “Jamia Millia University’s current project is an attempt to run the university on renewable energy and will position it as a leader among central universities in the use of renewable energy. The solar plant would also greatly benefit students pursuing BTech and BVoc degrees at Jamia Millia.”

The university “will incur no cost on the setup and maintenance as it will be taken care of by SunSource Energy, with the support from the SECI”.

“With the installation of the 2.5MW plant, the university is expected to save over Rs 1 crore annually apart from significantly contributing to the environment,” said SunSource COO and Co-founder Kushagra Nandan.

SunSource has executed some prestigious solar rooftop projects here including at the India Habitat Centre and Vasant Valley School, and is currently involved in over 200MW of solar projects in India and internationally and targets to reach 1.5 GW (gigawatt) capacity by 2025, the statement said.

The firm expects to reach an annual turnover of over Rs 600 crore by 2020.