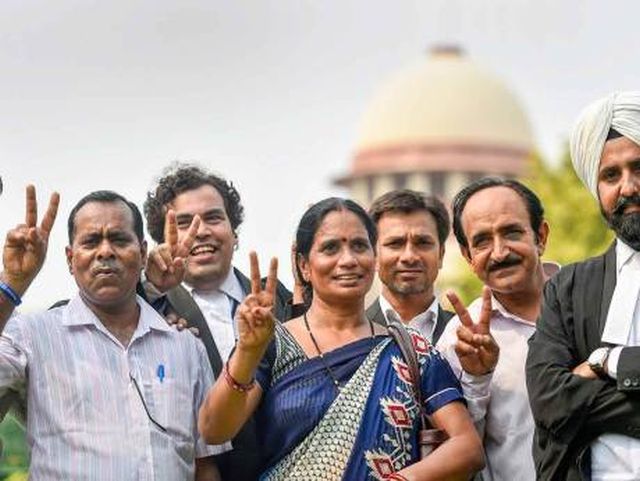 New Delhi : The Supreme Court on Monday rejected review petitions filed by three of the four convicts and upheld the death punishment in the horrific 2012 gang rape and murder of a young Delhi professional who came to be known as Nirbhaya.

Convicts Mukesh, 29, Pawan Gupta, 22, and Vinay Sharma, 23, had sought recall of the Supreme Court’s May 5, 2017 verdict upholding the death sentence awarded by a trial court and confirmed by the Delhi High Court. The fourth, Akshay Kumar Singh, 31, had not filed for a review.

The court also said the hearing on the appeals against the Delhi High Court judgement confirming the death sentence lasted 38 days as defence lawyers were given full opportunity to state their cases.

“Review applications cannot be entertained. (A) convict cannot be allowed to re-agitate the grounds of appeal. There has to be an apparent error on record to show it resulted in miscarriage of justice.

“The death row convicts failed to point out error in the judgement. (The) convicts were heard elaborately during appeals and no grounds have been made out for review of its verdict,” Justice Bhushan said.

The victim’s mother Asha Devi said she hoped the convicts would be executed soon.

“There is more fight ahead, but we have got justice once again. We hope that the legal formalities are taken care of and the culprits are taken to the gallows as soon as possible.”

Union Minister for Women and Child Development Maneka Gandhi said she was “satisfied” with the Supreme Court verdict in the case that led to the amendment of the Criminal Procedure Code to make rape punishable with death penalty.

The convicts, who lived in Delhi, are now left with another legal option, seeking a relook at death sentences through a curative petition.

Curative petitions are filed to challenge the death penalty on the grounds that an evidence or a legal point was not argued, violating principles of natural justice.

If curative petition is also dismissed, then a mercy petition can be filed before the President of India who takes takes a call on the basis of the opinion given by the central government.

The December 16, 2012 gangrape and murder of the 23-year-old paramedic student, Nirbhaya, the name given to her by the media which means fearless, caused global shock and outrage.

The crime was committed inside a moving bus in south Delhi by six drunk people. Nirbhaya and her male friend, who survived the attack, had just finished watching a movie.

The woman was thrown out on the road, severely injured. She succumbed to her injuries on December 29, 2012 at Mount Elizabeth Hospital in Singapore.

One of the accused in the case, Ram Singh, allegedly committed suicide in the Tihar jail. A juvenile among the culprits was convicted by a juvenile justice board. He was released after serving a three-year term in a reformation centre.