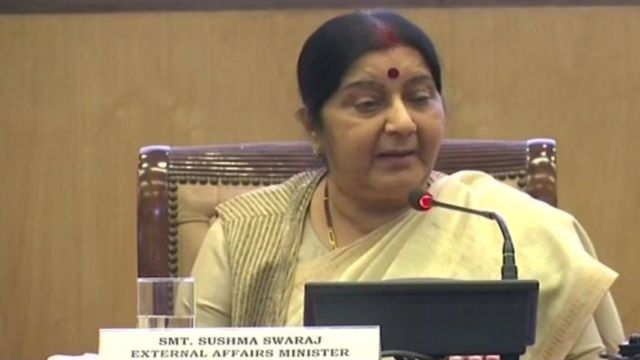 “We are always ready for talks with Pakistan. We have never said we are not ready for talks. But there is a caveat. Terror and talks don’t go together,” she said at a press conference.

She said a comprehensive dialogue with Pakistan was not possible when attacks were being carried out and people killed.

Replying to a question about engagement with Pakistan at other levels, Sushma Swaraj said the Coast Guard and the Border Security Force continue talking to their Pakistan counterparts.

On Pakistan’s controversial Gilgit-Baltistan order that alters the status of the northern region of the parts of Jammu and Kashmir under Islamabad control, the minister said India had lodged its protests over the order and “the answer we got… is laughable”.

“As for Gilgit-Baltistan being named by Pakistan as its fifth state, the same day we expressed our opposition, and the reply came more as a lesson on history and geography. I felt while reading their answer was, ‘look who’s talking’,. They need not give us gyan on it.”

As for Saarc minus Pakistan, she said the South Asian bloc would not remain a grouping if a country went out.