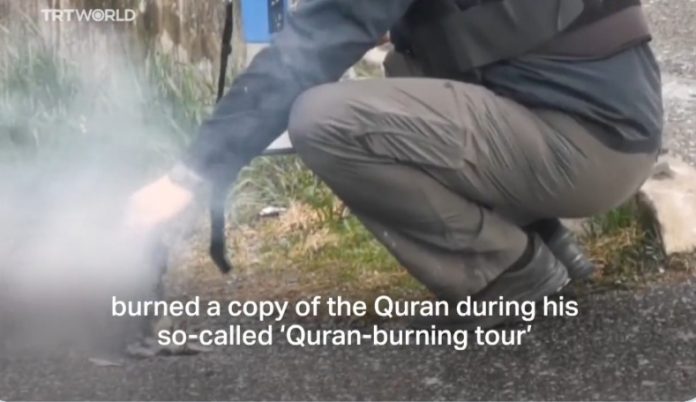 On Saturday, the Turkish government summoned the Swedish ambassador to Ankara and demanded an explanation for the Quran burning in front of the Turkish embassy in Stockholm.

Rasmus Paludan, a leader of Sweden’s right-wing movement, reportedly gained approval from the Swedish government to burn the Quran. He committed the act while being guarded by the police.

According to sources in the Turkish foreign affairs ministry, Turkey’s disapproval of the act—which was provocative and “clearly a hate crime”—was made extremely plain to the ambassador.

Sweden has given far-right Danish-Swedish politician Rasmus Paludan the green light to burn a copy of the Quran outside the Turkish embassy in Stockholm on January 21.

Here’s a look at why some extremist groups in Europe burn copies of the Quran and what they gain from it pic.twitter.com/WQQ4eV8eNr

“Sweden’s attitude is unacceptable. We expect the act not to be allowed, and that insults to sacred values cannot be defended under the guise of ‘democratic rights’.”

Who is Rasmus Paludan?

Sweden condemned the event, but Turkey said the Nordic nation needed to take a tougher stance and that merely condemning it was insufficient.

The 41-year-old said he would embark on a “Quran burning tour” in April of last year, during Ramadan. In areas where Muslims are the majority, he began to burn the holy book.

Riots broke out as a result, and over 40 individuals were arrested.

Paludan has a history of stirring up controversy. He received a two-year entry ban into Sweden in September 2020. He was refused entry to Germany that same year in October after declaring he would hold a protest against Muslims and Islam in Berlin.