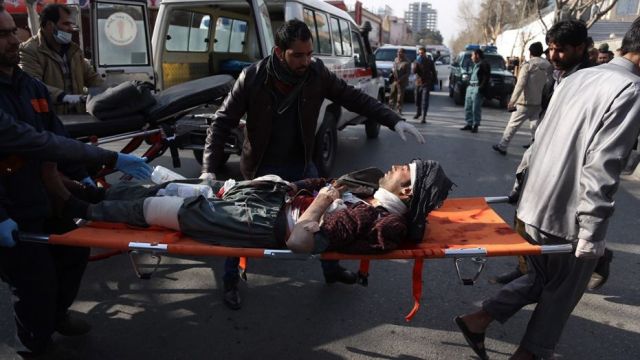 Kabul : At least 63 people were killed and over 150 others injured on Saturday when a Taliban suicide bomber exploded an ambulance laden with explosives near Sidarat Square in central Kabul where several government offices are located.

“At least 63 people were killed and a further 151 were wounded in today’s (Saturday) attacks,” said Barilai Helali, Director of the Afghan government’s Information and Media center, at a press conference in Kabul.

A Ministry spokesperson, Ismail Kawosi, told Efe that the hospitals in the area confirmed these figures after the attack near the former Interior Ministry building and a facility of the National Directorate of Security (NDS) in Sadarat Square, downtown Kabul.

The explosion occurred at around 12.50 p.m. near the old building which still houses some ministry offices.

Kabul police spokesperson, Basir Mujahid, confirmed to Efe that “a suicide bomber with a car laden with explosives tried to penetrate the complex (the ministry), but detonated the vehicle as he was being identified by police at the checkpoint”.

The Taliban claimed the attack in a message on the social network Telegram stating that “a martyr in a car bomb reached the first checkpoint near the Interior Ministry”.

Taliban spokesperson Zabihullah Mujahid said that at the time of the explosion, a large contingent of police officers was in the area.

Public hospital Jamhuriat, some NGO offices and busy local markets are also located in the area.

The attack comes amid a recent surge in terrorist attacks on civilian targets by the Taliban and Islamic State.

Last weekend over 20 people died at the Intercontinental Hotel in Kabul during an assault by six armed attackers who clashed with security forces for 12 hours.

On Wednesday, the IS led an attack on Save the Children’s headquarters in Jalalabad killing four NGO employees, a passerby and a security force member along with the five terrorists.