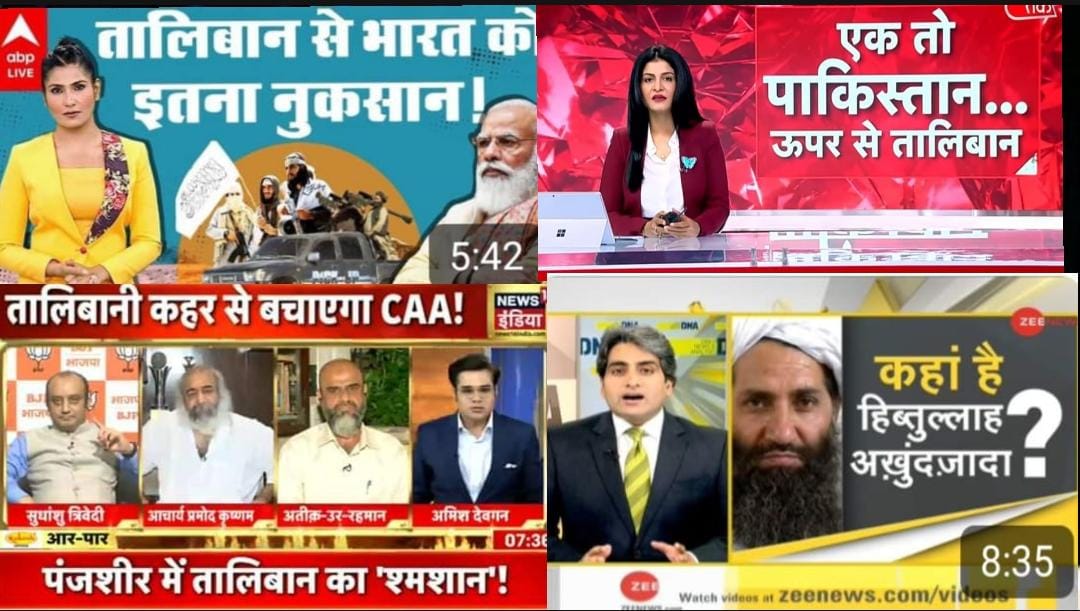 The Taliban takeover in Afghanistan has rejuvenated TV news anchors to continue with their ‘demonise Muslim agenda’ with even more propensity ostensibly to serve electoral gameplan of the BJP which is gearing up for assembly polls in Uttar Pradesh due next year.

Indian media, particularly TV news channels, for nearly a decade has been fostering hatred against Muslims leading to hate violence, including incidents of mob lynching. In the name of denouncing Taliban, programmes (packages) are cunningly designed to demonise Islam and its tenets with the help of unverified footage and statements. Concocted facts, half-truth and lies are recklessly processed and served to Indian people 24×7 in a fashion which is tantamount to trigger hate against the Muslim community.

Taliban is only an excuse. In one pretext or the other, Indian media has been keeping its anti-Muslim rants high. This is the corollary of the post 9/11 discourse set by the global media which was lapped up by Indian media with even more swiftness and eagerness. It has now lapsed into inertia. Muslims don’t expect TV news channels to behave sensibly or soberly in treating them, but they certainly want them to spare their belief at least.

The ongoing coverage on Taliban can be matched with the one the whole world witnessed during the coronavirus-induced lockdown last year when the Tablighi Jamaat members were ‘chosen to be made scapegoats’. TV reporters roamed through the lanes and by-lanes of the Muslim localities peeping through windows into mosques to see if anyone was praying there. A journalist colleague of mine who happened to be the one among the scores of ‘eagle-eyed’ reporters approached me, requesting me to take him for a tour to the local mosques in New Delhi’s Jamia Nagar locality precisely to catch their ‘potential prey’. I, however, snubbed him.

Cut to Taliban episode, the nit-picking on Muslims for airing their views in support of opening channel of communication with the insurgents has been on – notwithstanding a group of more than 150 intellectuals, activists and academics under the aegis of Indian Muslims for Secular Democracy denounced the Muslims who call for any ties with Taliban. While scores of diplomats and experts have expressed their opinion for opening channels of communication with the insurgents who are going to make government in the war-torn nation, the same from a Muslim-sounding name evokes  curiosity.

Call it a deliberate attempt or out of ignorance, media loves to portray Muslims as a homogeneous group, which is far from reality. In fact, homogeneity doesn’t exist in any faith group, nor is it desirable. On the other hand, a few skull-cap Muslims also love to see themselves on TV screen for which they deliberately make such statements. It is, however, a basic journalistic principle to allow space to only those who have a mandate on the subject concerned. It is rarely followed. As a result, almost all the Muslim organisations have stopped sending their representatives in TV debates, leaving the guest coordinators to content with novice. It is indeed not easy to be Muslim in India.

The writer, an independent media analyst, can be reached at quamar.ashraf@gmail.com

Starving families sell their children to survive in Afghanistan