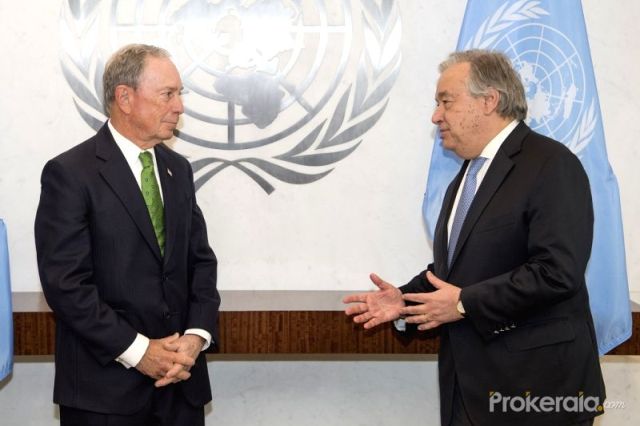 United Nations : Secretary-General Antonio Guterres is betting that the battle against climate change will be won through the technological advances and public mobilisation even if governments fail to act.

While “there are reasons to be alarmed” about the rapid pace of climate change, “we believe that the right bet is the bet that technology is pointing to, and that bet is the green technology, and cities, companies, consumers are making that bet,” he said on Monday.

“I think that what is clear is that the reality is changed by the companies that produce, the consumers, the cities that manage,” he said. “Very little depends today, in relation to climate change, on central government.”

“I am very confident that this battle will be won, because the realities of today’s economy are such that the wise decision is the green decision,” he added, while speaking to reporters announcing the re-appointment of Michael Bloomberg, the media tycoon and former New York mayor as his Special Envoy for Climate Action.

“Because of technological advances, the cheapest energy today is green energy,” Guterres said.

Reinforcing it is the “enormous capacity to mobilise the civil society, the business community and the cities” he said. “And we see cities, but also companies and civil society everywhere, leading climate action, leading the capacity of the international community to be able to beat climate change.”

In an apparent warning to US President Donald Trump, who has tried to roll back some of the environmental regulations and programmes for countering climate change, Guterres said without naming him, “Countries that do not back today the green economy will not be leading countries in the global economy of the future.”

Bloomberg said that “without any help whatsoever from the federal government” the US was way ahead in meeting the greenhouse gas reduction goals set for 2025.

“In fact, we have done more than any other industrial country in the world to meet those goals.”

The multi-billionaire is the founder of the financial news and information company that bears his name and he also runs a philanthropy devoted to fighting climate change and issues of immigration, gun control and public health.

He was first appointed the Secretary-General’s Special Envoy for Climate Action by Guterres’s predecessor Ban Ki-moon in 2015.

“Because of public pressure and the low price of natural gas, 268 of about 500 coal-fired electricity plants in the US have closed or are in the process of closing,” Bloomberg said.

“Corporations today are very, very sensitive to their responsibilities to be environment friendly,” Bloomberg said.

“When a big money manager goes to visit a corporation to check on their earnings, the first question that comes in this day and age is, ‘What are you doing to fight climate change?'” he said. This is because the pension funds, endowments and other investors want their money to be invested responsibly, he explained.

As for Trump, he said he hoped that the president “listens to his advisers and looks at the data and changes his mind.”

“And if that is the case, that shows a great leader, who, when facts change, they recognise something different, they are not bound to what they did before, they are willing to change,” he said. “And I think it is fair to say that this president does change his view, generally from one day to the next, but over a longer period of time, hopefully he will.”