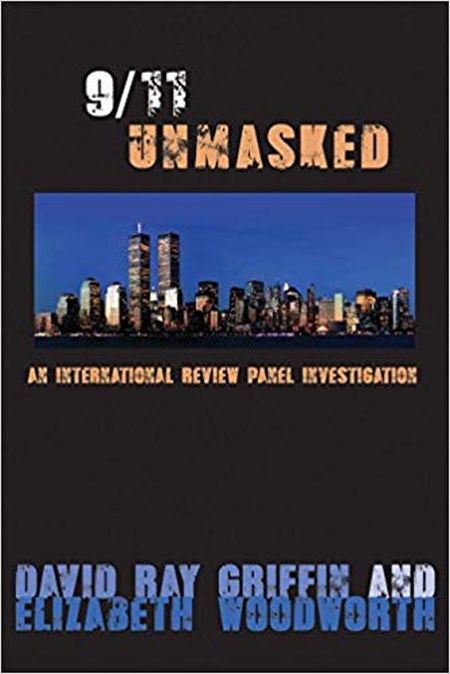 A Review of 9/11Unmasked: An International Review Panel Investigation by David Ray Griffin and Elizabeth Woodworth

If you want to fathom today’s world, absolutely nothing is more important than to understand the truth about the attacks of September 11, 2001. This is the definitive book on the subject.

For seventeen years we have been subjected to an onslaught of U.S. government and corporate media propaganda about 9/11 that has been used to support the “war on terror” that has resulted in millions of deaths around the world.  It has been used as a pretext to attack nations throughout the Middle East, South Asia, and Africa.  It has led to a great increase in Islamophobia since Muslims were accused of being responsible for the attacks.  It has led to a crackdown on civil liberties in the United States, the exponential growth of a vast and costly national security apparatus, the spreading of fear and anxiety on a great scale, and a state of permanent war that is pushing the world toward a nuclear confrontation.  And much, much more.

The authors of this essential book, David Ray Griffin and Elizabeth Woodworth, and all their colleagues who have contributed to this volume, have long been at the front lines trying to wake people up to the real news about 9/11.  They have battled against three U.S. presidents, a vast propaganda machine “strangely” allied with well-known leftists, and a corporate mass media intent on serving deep-state interests, all of whom have used illogic, lies, and pseudo-science to conceal the terrible truth.  Yet despite the establishment’s disinformation and deceptions, very many people have come to suspect that the official story of the September 11, 2001 attacks is not true.

With the publication of 9/11Unmasked: An International Review Panel Investigation, they now have a brilliant source book to use to turn their suspicions into certitudes.  And for those who have never doubted the official account (or accounts would be more accurate), reading this book should shock them into reality, because it is not based on speculation, but on carefully documented and corroborated facts, exacting logic, and the scientific method.

The book is based on the establishment in 2011 of a scientific review project comprising 23 experts with a broad spectrum of expertise, including people from the fields of chemistry, structural engineering, physics, aeronautical engineering, airline crash investigation, piloting, etc. Their job was to apply systematic and disciplined analyses to the verifiable evidence about the 9/11 attacks.  They used a model called the Delphi Method as a way to achieve best-evidence consensus.  This best-evidence consensus model is used in science and medicine, and the 9/11 Consensus Panel used it to examine the key claims of the official account(s).  Each “Official Account” was reviewed and compared to “The Best Evidence” to reach conclusions.  The authors explain it thus:

The examination of each claim received three rounds of review and feedback.  According to the panel’s investigative model, members submitted their votes to the two of us moderators while remaining blind to one another.  Proposed points had to receive a vote of at least 85 percent to be accepted…This model carries so much authority in medicine that medical consensus statements derived from it are often reported in the news.  They represent the highest standard of medical research and practice and may result in malpractice lawsuits if not followed.

This research process went on for many years, with the findings reported in this book.  The Consensus 9/11 Panel provides evidence against the official claims in nine categories:

Each category is introduced and then broken down into sub-sections called points, which are examined in turn.  For example, the destruction of the Twin Towers has points that include, “The Claim That No One Reported Explosions in the Twin Towers,” “The Claim That the Twin Towers Were Destroyed by Airplane Impacts, Jet Fuel, and Fire,” “The Claim That There Were Widespread Infernos in the South Tower,” etc.  Each point is introduced with background, the official account is presented, then the best evidence, followed by a conclusion.  Within the nine categories there are 51 points examined, each meticulously documented through quotations, references, etc., all connected to 875 endnotes that the reader can follow.  It is scrupulously laid out and logical, and the reader can follow it sequentially or pick out an aspect that particularly interests them.

The 9/11 Consensus Panel members describe their goal and purpose as follows:

The purpose of the 9/11 Consensus Panel is to provide the world with a clear statement, based on expert independent opinion, of some of the best evidence opposing the official narrative about 9/11.

The goal of the Consensus Panel is to provide a ready source of evidence-based research to any investigation that may be undertaken by the public, the media, academia, or any other investigative body or institution.

As a sociologist who teaches research methods and does much research, I find the Consensus Panel’s method exemplary and their findings accurate. They have unmasked a monstrous lie.  It is so ironic that such serious scholars, who question and research 9/11, have been portrayed as irrational and ignorant “conspiracy theorists” by people whose thinking is magical, illogical, and pseudo-scientific in the extreme.

A review is no place to go into all the details of this book, but I will give a few examples of the acumen of the Panel’s findings.

As a grandson of a Deputy Chief of the New York Fire Department (343 firefighters died on 9/11), I find it particularly despicable that the government agency, the National Institute of Standards and Technology (NIST), that was charged with investigating the collapse of the Towers and Building 7, would claim that no one gave evidence of explosions in the Twin Towers, when it is documented by the fastidious researcher Graeme MacQueen, a member of The 9/11 Consensus Panel, that over 100 firefighters who were at the scene reported hearing explosions in the towers.  One may follow end note 22 to MacQueen’s research and his sources that are indisputable.  There are recordings.

On a connected note, the official account claims that there were widespread infernos in the South Tower that prevented firefighters from ascending to the 78th floor.  Such a claim would support the notion that the building could have collapsed as a result of fires caused by the plane crashing into the building.  But as 9/11 Unmasked makes clear, radio tapes of firefighters ascending to the 78thfloor and saying this was not so, prove that “there is incontrovertible evidence that the firefighter teams were communicating clearly with one another as they ascended WTC” and that there were no infernos to stop them, as they are recorded saying.  They professionally went about their jobs trying to save people.

Then the South Tower collapsed and so many died.  But it couldn’t have collapsed from “infernos” that didn’t exist.  Only explosives could have brought it down.

A reader can thus pick up this book, check out that section, and use common sense and elementary logic to reach the same conclusion.  And by reaching that conclusion and going no further in the book, the entire official story of 9/11 falls apart.

Or one can delve further, let’s say by dipping into the official claim that a domestic airline attack on the Pentagon was not expected.  Opening to page 78, the reader can learn that “NBC’s Pentagon correspondent Jim Miklaszewski was warned of the Pentagon attack by an intelligence officer,” who specified the illogical spot where the attack would happen shortly before it did.  In Miklaszewski’s words, “And then he got very close to me, and, almost silent for a few seconds, he leaned in and said, ‘This attack was so well coordinated that if I were you, I would stay off the E Ring – where our NBC office was – the outer ring of the Pentagon for the rest of the day, because we’re next.’”  The authors say correctly, “The intelligence officer’s apparent foreknowledge was unaccountably specific.”  For if a terrorist were going to fly a plane into Pentagon, the most likely spot would be to dive into the roof where many people might be killed, including top brass and Defense Secretary Rumsfeld.  To make an impossibly acrobatic maneuver to fly low into an outside wall would make no sense.  And for the government to claim that this impossible maneuver was executed by the alleged hijacker Hani Hanjour, a man who according to documentation couldn’t even pilot a small plane, is absurd.  But the intelligence officer knew what would happen, and the reader can learn this, and marvel.

Or the reader can start from the beginning and read straight through the book.  They will learn in detail that the official version of the attacks of 9/11 is fake news at its worst.  It is a story told for dunces.

Griffin and Woodworth and their colleagues simply and clearly in the most logical manner show that the emperor has no clothes, not even a mask.

Since knowing the truth about the attacks of September 11, 2001 is indispensable for understanding what is happening in today’s world, everyone should purchase and read Unmasking 9/11: An International Review Panel Investigation.  Keep it next to your dictionary, and when you read or hear the latest propaganda about the 9/11 attacks, take it out and consult the work of the real experts.  Their words will clarify your mind.

It is the definitive book on the defining event of the 21st century.

Edward Curtin is a writer whose work has appeared widely. He teaches sociology at Massachusetts College of Liberal Arts. His website is http://edwardcurtin.com/