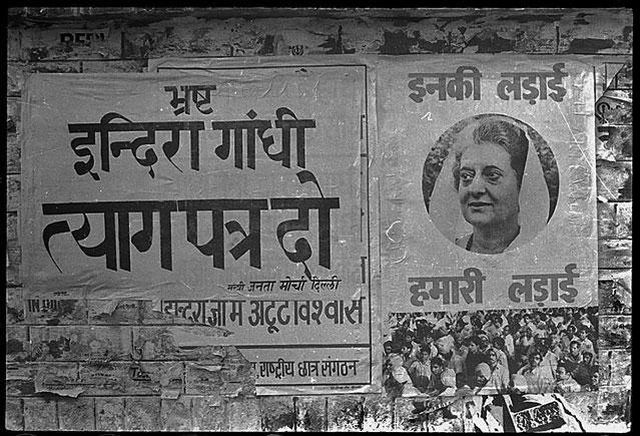 Indira Gandhi declared the Emergency in 1975, plonk in the middle of the most intense phase of the Cold War. Detente was going so badly for the Americans that stand up comedians in Washington were comparing it to a wife swapping party “from where you return alone”.

After the Vietnam debacle, Washington was going to exert every muscle not to allow Moscow to build upon the strategic asset it had created for itself in New Delhi during the 1971 Bangladesh war.

In fact, the Congress split of 1969 was itself an advantage for Moscow. Indira Gandhi had discarded the conservative, pro-capital big wigs, more comfortable with Congress stalwarts like Morarji Desai whom she had defeated in the Parliamentary party contest to become Prime Minister in 1966.

Not only was a former card carrying Communist (from Eton and Oxford too), Mohan Kumaramangalam, part author of the split, he had worked out an arrangement with the General Secretary of the CPI, S.A. Dange, described as a policy of “Unite and Struggle”. We shall, said Dange, unite with the Congress’ progressive policies but “struggle” against its “anti people” deviations.

This was a pronounced leftward lurch and it was going to be resisted by a coalition of the Right, both internal and external. Indeed, as early as 1967, within a year of her coming to power, Indira Gandhi was given notice: she lost elections in eight states to parties of the opposition. This groundswell would obviously suit the purposes of the Congress old guard discarded by Gandhi.

The most succinct observation on Gandhi’s ideological leaning came from the correspondent of the Times London, Peter Hazelhurst: “She is a little to the Left of self interest.”

Her ideological inconsistency becomes apparent if one reverts to her earliest days in 1959 as President of the Congress. She dismissed the world’s first Communist government which had come to power through the ballot box in Kerala. That she took American help to unsettle Kerala to justify the state government’s dismissal was revealed by US ambassador, Ellsworth Bunker in an oral interview kept in the Columbia University archives. Whatever doubts there might have been about the Bunker revelations, were cleared later by Ambassador Daniel Patrick Moynihan in his memoirs.

During her Prime Ministership in 1976, the Congress party raised a storm against the US having installed a nuclear device on Nanda Devi peak to spy on China. The controversy had many twists. A joint CIA and Intelligence Bureau effort to install the device in 1965 (Lal Bahadur Shastri was Prime Minister then) had failed because of bad weather. Worse, two plutonium laden capsules had been lost. According to the Intelligence estimates the plutonium was enough for half a Hiroshima bomb.

In the course of an interview, Chester Bowles, US ambassador during Indira Gandhi’s first innings, took my breath away. He couldn’t understand Congress protest. “After all Indira had asked me to complete in 1966 the project which had been aborted in 1965.”

Well, this is how the Congress’ attitude towards the super powers varied from time to time. But for the West the spectacle of Gandhi and Dange in a warm embrace was alarming because of the context. The West had taken a series of knocks – Vietnam, Angola, Mozambique, Ethiopia, Nicaragua were all Communist. Additionally Communist leaders Enrico Berlinguer, Georges Marchais, Santiago Carrillo in Italy, France and Spain respectively were a headache for the West. Given this state of play, India was too priceless a trophy to be easily lost to Moscow’s sphere of influence.

The obstacle in the way of a counteroffensive was Gandhi’s personality. She had evolved into a charismatic and, therefore, invincible leader. Proprietor of the Indian Express, Ramnath Goenka and Nanaji Deshmukh, fell into deep thought.

The Indian mind reveres renunciation. It occurred to the head hunters that once a top ranking Socialist leader, Jayaprakash Narayan, had renounced political power. He was keeping himself busy with Gandhiji’s ashrams and such unlikely causes as Acharya Vinoba Bhave’s Bhoodan or Land Gift movement. JP agreed to lead the movement provided it remained peaceful.

The youth were in agitation across the globe against the excesses of the Vietnam War – Grosvenor Square, London, barricades in Paris, police shooting down of students at the Kent state university in Ohio, US. Soon thereafter the Navnirman Andolan, youth agitation in Gujarat erupted on a seemingly flimsy issue of hostel fees. After visiting Gujarat, JP was prevailed upon to launch a similar movement against corruption and bad governance in Bihar. It was a tepid agenda livened up only by the media dedicated to the task of keeping up the pressure on New Delhi, boosting notions of a “total revolution” one day, asking police and the bureaucracy not to obey “bad” orders another, and so on. The immediate target of the “movement” was a hapless Chief Minister, Abdul Ghafoor, quite bewildered by his own eminence. Why was he in the eye of a storm? He had sunken cheeks and a drooping frame, draped in a much worn Sherwani. By way of hospitality for visiting scribes, he would fetch a bottle of old smuggler Scotch whisky from his wardrobe full of smudged clothes which were clearly waiting for laundry. He was a simple man, not a plausible enough crook to invite a national movement for his ouster.

JP, who had invited me to stay in his house in Patna’s Kadam Kuan, listened to my stories even about the Chief Minister with a kindly smile. He was a trusting man and totally non judgemental about the wide range of political interests who had clambered onto his movement.

The movement was carried mostly by RSS cadres, with a sprinkling of socialists, Gandhians and Congress (O), mostly those who had been shown the door by Gandhi in 1969. This exactly was the rough outline of the group which morphed into a coalition in the course of the movement. The coalition came to power in 1977 as the Janata Party.

Supposing the Allahabad High Court had not disqualified Gandhi, how would events have shaped? If Sanjay Gandhi, Siddhartha Shankar Ray, Muhammad Yunus and others had not forced her hand on the Emergency, how would the Gandhi-JP standoff have concluded?