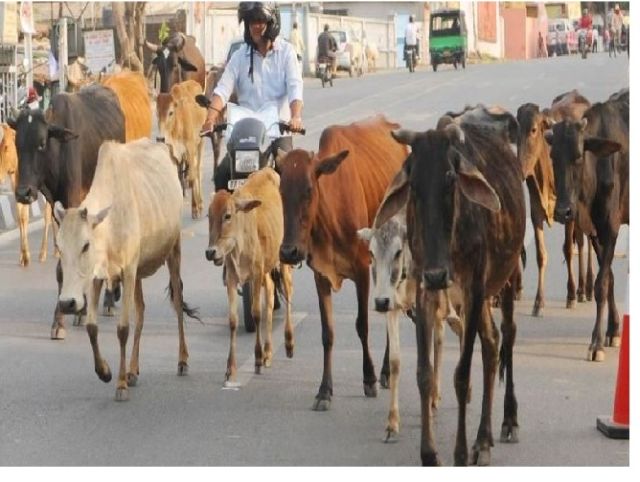 Throughout country farmers are abandoning un-productive cows (which cannot be milked) which were disposed in animal bazaars earlier. It is the direct fall out of RSS/BJP leaders’ project of HOLINESS OF THE MOTHER COW. After violent attacks on Dalits and Muslims in different parts of country for being seen with cow or slaughtering cows now farmers, mostly Hindus, have to pay the price. According to a leading English daily in Madhya Pradesh “in a tacit admission that emphasis on anti-cow slaughter has not helped the cause of the cow, a state government committee has recommended that the existing law should be amended to include provisions to penalise owners who abandon their cattle.

“The state anti-cow slaughter law, the Madhya Pradesh Gauvansh Vadh Pratishedh Adhiniyam, has stringent provisions to punish those involved in the slaughter and illegal transportation of cattle, but there are no measures to punish owners who abandon their cows on the streets or in nearby villages.

“Madhya Pradesh, which accounts for nearly 10.27 per cent of country’s cattle population, has over the last few months struggled with the menace of stray cattle, with reports that abandoned cows were raiding crops and causing accidents on highways. MP has nearly 1.96 crore cattle heads but there is no estimate of the stray cattle population.

“We want to introduce a penalty for owners who abandon their cows. The penalty will be slapped even if a cow is killed in road accidents because it’s proof that the owner has abandoned it,’’ Swami Akhileshwaranand, chairman of the executive council of the Madhya Pradesh Cow Protection Board and a member of the committee, told The Sunday Express. He also said the committee was looking at how to get stray cows off highways and city streets by next year.” Apart from Akhileshwaranand this committee consists of bureaucrats from the departments of animal husbandry, cooperation, urban development and environment.[i]

The tragedy or the menace of abandoned cows is being witnessed throughout the farming India. Farmers are spending sleepless nights in guarding their crops not from wild animals or robbers but herds of poor hungry cows, normally a docile creature, which have turned into aggressive animals. They are dying eating plastic and meeting with accidents.

This tragedy is man-made and the credit goes to RSS/BJP rulers. In order to keep the communal pot boiling and polarize the Indian society holiness of cow has been advanced as the most important object of governance. In fact this project as ancient wisdom is not even in conformity with the life of Vedic times where saints and rishis had sway.

Swami Vivekananda, regarded as a philosopher of Hindutva by the RSS, while addressing a meeting at the Shakespeare Club, Pasadena, California, USA (February 2, 1900) on the theme of ‘Buddhistic India’, declared:

“You will be astonished if I tell you that, according to old ceremonials, he is not a good Hindu who does not eat beef. On certain occasions he must sacrifice a bull and eat it.”[ii]

This is corroborated by other research works sponsored by the Ramakrishna Mission established by Vivekananda. According to C. Kunhan Raja, a prominent authority on the history and culture of the Vedic period:

“The Vedic Aryans, including the Brahmanas, ate fish, meat and even beef. A distinguished guest was honoured with beef served at a meal. Although the Vedic Aryans ate beef, milch cows were not killed. One of the words that designated cow was aghnya (what shall not be killed). But a guest was a goghna (one for whom a cow is killed). It is only bulls, barren cows and calves that were killed.”[iii]

Anyway, to penalize farmers for abandoning barren cows who are already immensely distressed would be rubbing salt to their wounds. Cow as our MAATAA should not become a curse for poor farmers. NCP leader and prominent politician Sharad Pawar has given a very good and timely suggestion for serving/saving such cows. He has advised farmers to take such discarded cows to the vast properties which house offices of RSS, its affiliates and schools run by it so that the RSS paraphernalia and its leaders/cadres also contribute to the service of these cows. If space in these offices is not sufficient for keeping these cows RSS with lakhs of members should distribute these cows amongst its members. It is high time RSS comes forward to serve GAU MAATAA.

RSS HAS A GOD SENT GREAT OPPORTUNITY TO SERVE COWS. IT SHOULD ORDER ITS CADRES, SPECIALLY IN CITIES, TO ADOPT AT LEAST ONE SUCH COW TO SAVE THEM FROM ABANDONMENT WHICH MEANS HUNGER AND THREAT TO LIFE OF COWS. IF RSS CANNOT DO IT THEN SHOULD NOT LET POOR COWS DIE OF HUNGER AND ACCIDENTS. IT SHOULD ORDER ITS CADRES WHO ARE RULING STATES LIKE GOA (WHERE BEEF IS MADE AVAILABLE BY THE GOVERNMENT) TO BUY THESE COWS FROM THE DISTRESSED FARMERS SO THAT COWS ARE NOT ABANDONED.