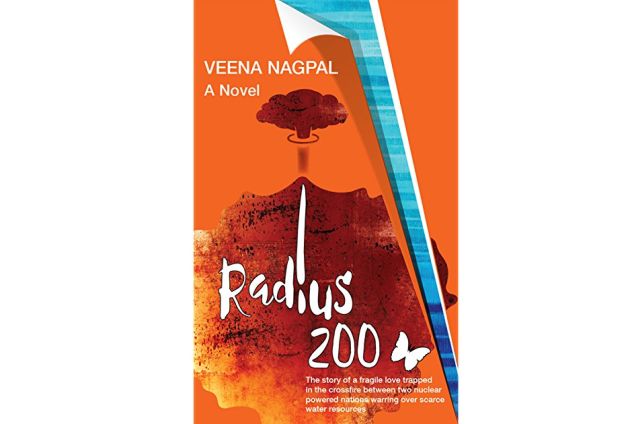 New Delhi : A recent novel, “Radius 200” by author Veena Nagpal, has two facts at the centre of the fictional narrative that she weaves. “Impending water scarcity and the very real danger of an Sino-Indian conflict over this precious resource,” says Nagpal in the context of her book that was launched with much fanfare at the Jaipur Literature Festival in January.

“I had once seen a small video made by ex-President A.P.J. Abdul Kalam. It very graphically depicted what water scarcity could do to human beings. Later, experts began predicting that the Third World War could be triggered by water scarcity — and that Asia was a flash point. India relies on the river Brahmaputra for 30 per cent of its water needs. China is building the world’s largest dam to divert the waters of the Brahmaputra to its own territory. Once the dam becomes a reality China could, at will, flood India or starve it of water,” Nagpal told IANS in an interview.

This impending water crisis, coupled with the “deteriorating politico-military relationships within India”, led the author to speculate.

“What if a top-ranking Indian general took it into his head to blow up the Chinese dam? What deadly sequence of events would follow — retaliatory nuclear attack? An Exclusion Zone? What if two lovers were separated — one inside the Exclusion Zone and one outside?” she asked.

And this is what happens in the novel. Like the meeting point of three rivers, “Radius 200” is the confluence of three stories: The story follows Kyra, a journalist in search of her lost love; and Arjun, a geologist, passionately seeking the lost river Saraswati. Their narrative is intertwined with the story of Om, an Indian Army officer, now in a vegetative state, grappling with lost memories of two decades ago, when a general triggered a nuclear attack by blowing up China’s dam on the Brahmaputra.

The core of the plot is set against the deadly power struggle within a tiny band of nuclear survivors, desperately seeking water within the 200-kilometre radius of a devastated “Exclusion Zone”. The book depicts two contrasting realities — the life of the tiny band of survivors inside the “Exclusion Zone” and life outside.

“As a novelist I see myself more as an observer and chronicler of human relationships working out in different conditions — sometimes even extreme situations. I do not set out to ‘highlight’ any ‘issue’. If the credibility of my fictional universe does end up drawing attention to a vital issue, for me it is a bonus,” she said.

The author said that most of us live in our own small worlds — a limited circle of sorts — and we operate within these circles.

“So I see these billions of small circles and where they intersect is where relationships happen — love, hate, jealousy, power struggles. Then there are also those larger circles that represent the life of nations, the life of this earth we live on. I find it fascinating to imagine what happens in the space where these little circles — each with its own baggage of emotions and relationships — intersect with the larger circles; when individual concerns — unexpressed loves, unfulfilled ambitions — collide against the larger forces at work in this world,” elaborated Nagpal, who has authored seven previous books, four of which are for children.

Nagpal said that in today’s world, there is a combination of water scarcity and nuclear proliferation. And amid this “highly volatile geo-political environment,” there is a “disgruntled defence force” in India.

“So I just had to explore how human relationships would work out in this extreme situation,” she contended.