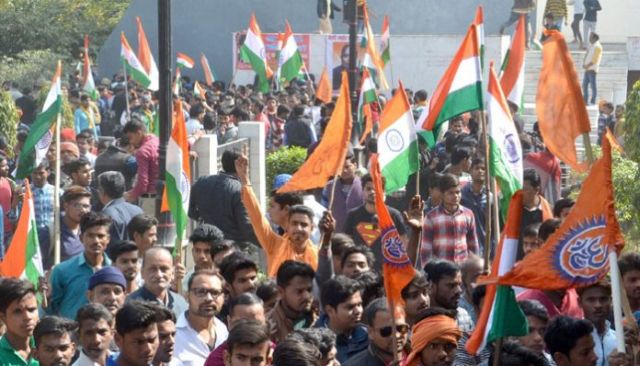 Agra : Supporters of the Vishwa Hindu Parishad and other Hindutva organisations on Wednesday took out a procession and two-wheeler rally in Agra in Uttar Pradesh despite restrictions imposed on the assembly of four or more persons in the town.

Though the district administration had deployed additional security at road crossings and localities inhabited by members of a particular community and also imposed Section 144 of the Code of Criminal Procedure (banning assembly of four or more persons), no efforts were made to stop the processionists riding two-wheelers through the town’s main streets.

A few of the processionists raised provocative slogans also.

Holding Tricolours, the rallyists marched from the Shaheed Smarak to the Collectorate headquarters to present a memorandum to the District Magistrate to demand Rs 50 lakh compensation for the family of Chandan Gupta, who was killed in the Kasganj violence.

They also demanded a government job for one member of the bereaved family, a plot of land and action against anti-national elements in Kasganj.

Communal clashes were reported in Kasganj on Republic Day on January 26, in which one youth was killed following a ‘Tiranga Yatra’ by the Rashtriya Swayamsevak Sangh-affiliated Akhil Bharatiya Vidyarthi Parishad and the Vishva Hindu Parishad.

Unidentified miscreants had pelted the motorcycle rally with stones. Chandan was killed, several persons injured and dozens of vehicles damaged in the ensuing clashes.