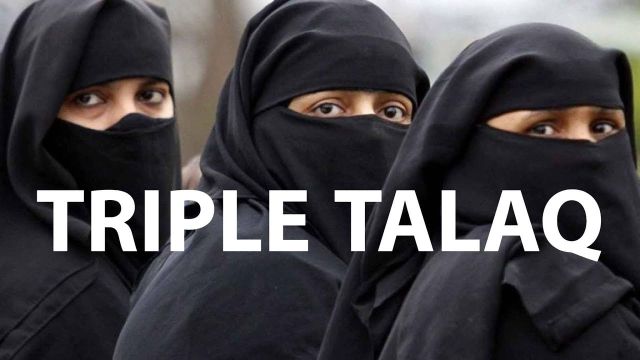 New Delhi: The ordinance on triple talaq promulgated by the BJP-led central government on Wednesday is being sharply criticized by the prominent Muslim groups. They unanimously described it as ‘blatant interference’ in the religious matter of the Muslim community and “unconstitutional”and “politically motivated”. All India Muslim Personal Law Board called it “undemocratic and an election stunt” while Jamiat Ulama-i-Hind (M) said the ordinance disrespects the sentiments of the Muslim community. All India Imams Council also said it was meant to “mislead people and to appease a tiny section” of the society.

All India Muslim personal Law Board, which is the vanguard of Shariah laws in the country, said Triple Talaq ordinance is “undemocratic and a political stunt”.

Board spokesperson Maulana Khalid Saifullah Rehmani said Talaq ordinance is an “election stunt, undemocratic and immoral”. Flaying the government, Rehmani opined that “Muslim women won’t get any benefit from this political gimmick”.

Echoing his views, activist and Board’s Women Wing president Dr. Asma Zehra said the government adopted undemocratic means to bring this ordinance. She tweeted that the ordinance was the failure of the Modi government.

“Triple Talaq ordinance is the failure of the government. No select committee, no discussion in RS, No expert opinion. It’s not a development. It won’t give any security to Muslim women. It’s totally against the values of democracy,” Dr Zehra said.

All India Muslim Majlis-e-Mushawarat (AIMMM), President Navaid Hamid termed the move as nothing but a “diversionary tactic” by the Modi government to deflect attention from its own failures and burning issues such as rising fuel prices and corruption.

“We should not even react to such provocations. I reckon the Modi government’s sole aim with this ordinance is to incite Muslims so that BJP can give it a communal colour and deflect attention from real issues,” he added.

Jamiat Ulama-i-Hind too strongly reacted to the promulgation of ordinance. JUH General Secretary, Maulana Mahmood Madani said the government has no power to meddle in religious affairs of any community.

“The government’s move was nothing but a blatant interference in religious matter.”

The government’s move is” hostile attitude, tyrannical suppressing the democratic process and undermining the popular sentiments of Muslims which is shameful act for a democratic nation,” he said.

It is a clear-cut case of “dictatorship” as the government did not feel any obligation to consult the members and experts of the Muslim community on the controversial bill which has direct bearings on the community and it also completely ignored suggestions presented by the religious scholars and Islamic jurists, he said.

Jamiat leader opined that the ordinance was not going to favor the divorced women in any way and would harm them because their case would be held up for long time, leading to roadblock for her to get married again, he opined..

Debunking Law Minister Ravi Shankar Prasad’s ‘justification’ for the promulgation of ordinance as ‘Constitutional urgency’ who referred 201 talaq cases within 2 years, Jamiat leader said if 100 divorce cases yearly occurred in the 17 crore strong Muslim community then it does warrant such hasty step.

Another notable organization, Jamaat-e-Islami Hind (JIH) also said the ordinance goes against the Constitution and has been brought about keeping an eye on the upcoming 2019 Parliamentary elections.

JIH President, Maulana Syed Jalaluddin Umari underlined the fact that the Constitution gives equal rights to every citizen to follow his or her religion while through this ordinance the government wants to implement a law that contravenes the Muslim Personal Law.

Explaining the talaq’s concept in Islam, Maulana Umari said this ordinance passed by the Government of India, triple talaq (pronouncing talaq three times in one sitting) will not be considered to be a divorce at all and shall be a punishable crime.

If someone is found guilty of giving triple talaq then he has to face a three year jail term and may have to pay some penalty as well. This is complete interference in the Islamic Sharia,” he added.

Maulana Umari asked why did the government bring about an ordinance and bypass the Parliamentary procedure when the bill has been pending in the Rajya Sabha?

Why is the government imposing such laws on Muslims? He asked.

“The ordinance says that if someone gives triple talaq then the divorce will not be valid and the husband has to go to jail for three years and in the meanwhile he has also to provide maintenance to his family including wife and children. Perhaps this is the only law in the world in which an action does not have any effect and yet the person accused of that action is punished for it’’.

The government should have consulted Islamic scholars and representatives of the Muslim community and made efforts to understand their point of view, he said.

He said it is clear that the ordinance was brought keeping an eye on the upcoming general elections.

Social Democratic Party of India also called it “undemocratic” act. SDPI vice-president Advo Sharfuddin Ahmad said ordinance issued in emergency situation and there is no such situation warranting the ordinance.It exposes the government’s political intent which did not even consider necessary to consult the community on the controversial talaq bill and brazenly bypassed the parliament, he said.

All India Imams Council also came down heavily on the government for bringing the ordinance. Council president Maulana Mohammad Ahmad Baig Nadvi said “this shows the desperation of the Modi government as it has failed on all counts.”

The country has been facing many pressing issues such as rising unemployment, skyrocketing prices of essential commodities, faltering economy and mounting corruption cases such as Rafale deal etc but the present government has shown little concern towards these issues, Maulana Nadvi said.

Meanwhile, after the Congress party, the Communist Party of India (Marxist) also slammed the Modi government. It said “the ordinance on triple talaq promulgated by the central government is uncalled for and is motivated by considerations other than that of the welfare of Muslim women. The triple talaq Bill is pending in the Rajya Sabha and requires a full discussion including reference to a Select Committee.”

The Polit Bureau said the ordinance is an “undemocratic” step bypassing parliament.

The triple talaq form of divorce has already been declared illegal by the Supreme Court judgment. The legislation regarding this has made a civil wrong into a criminal offence with the prescription of maximum three years punishment. This is an ill-conceived measure which will not help the interests of the affected women. There are other flaws in the Bill which needs to be rectified, it added.

The CPM alleged that the ordinance is designed to “serve the political interests of the ruling Party and cannot be accepted and Parliament should adopt a revised legislation in this regard.