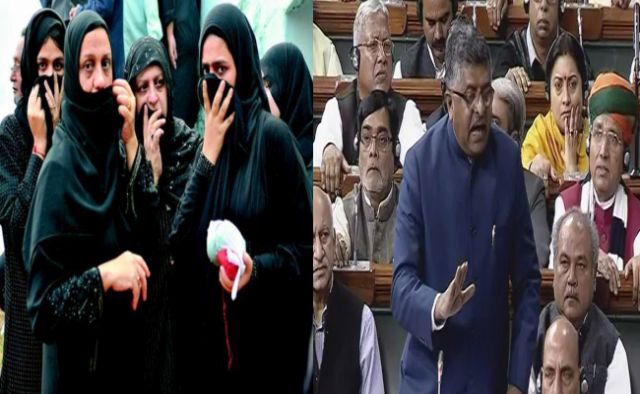 New Delhi : The Muslim Women (Protection of Rights on Marriage) Bill, 2018, commonly known as the Triple Talaq Bill, was introduced in the Lok Sabha on Monday despite opposition from the Congress and amid protests over the Rafale controversy.

Soon after the House reassembled at noon after the first adjournment, the Congress, the AIADMK and TDP members trooped near the Speaker’s podium and started sloganeering.

The Congress members were demanding a Joint Parliamentary Committee (JPC) probe into the Rafale jet fighter deal with France while the AIADMK members wanted Karnataka to take back its proposal to construct a dam across the Cauvery river at Mekadatu.

Amid the din, Minister Prasad sought permission from the Chair to introduce the bill.

Congress member Shashi Tharoor opposed the bill claiming it was targeted at a particular religion and hence unconstitutional.

“The bill was based on the ground of a specific religion and it was violation of sections 14 and 21 of the Constitution. This is a misconceived bill,” he said.

His objections were rejected by Prasad.

“The bill was brought in as per the direction of the Supreme Court to protect the rights of Muslim women. Several Muslim women suffered due to instant talaq. This bill is in the nation’s interest and constitutional. The objection is baseless,” Prasad said and then introduced the bill.

The government could not pass the bill in Rajya Sabha during the previous monsoon session.

Later it issued an ordinance on September 19 in making Triple Talaq a criminal offence.