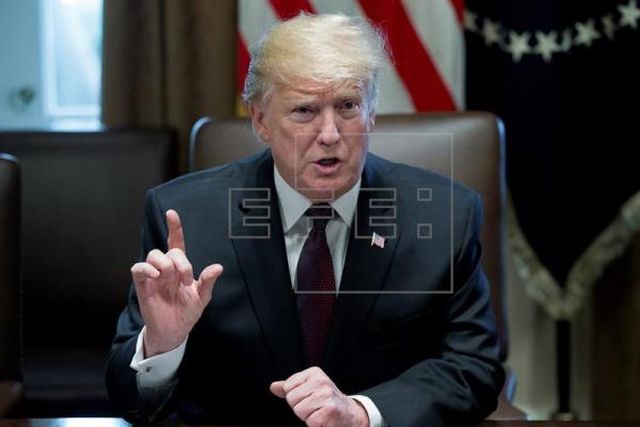 Washington : US President Donald Trump accused on Monday the deputy attorney general of the Justice Department, Rod Rosenstein, of planning to take illegal action against him, after former acting director of the FBI, Andrew McCabe, said that in 2017 there were alleged projects afoot to remove the president from office.

Trump blasted with a series of tweets an interview with McCabe that aired Sunday on CBS News, in which the former Justice Department official said there were conversations about the possibility of Rosenstein secretly recording Trump’s words in the White House and so begin an impeachment process.

“He was fired for lying, and now his story gets even more deranged. He and Rod Rosenstein, who was hired by Jeff Sessions (another beauty), look like they were planning a very illegal act, and got caught,” he added.

Trump fired Sessions last November, who until then was US attorney general, and the Justice Department terminated McCabe in March 2018, but Rosenstein remains in office.

Trump’s tweet signified a new attack on the deputy attorney general at a time of growing rumours about the possibility of his resigning or soon being replaced by another official, following the confirmation last week of William Barr as the new attorney general.

Rosenstein was in charge of supervising the independent investigation into Russian interference in the 2016 elections, from the dismissal in May 2017 of FBI Director James Comey until that of Sessions last November.

The president also said that McCabe and Rosenstein have “a lot of explaining to do to the millions of people who had just elected a president who they really like,” and insinuated that they tried to favour the Democratic opposition with their “illegal and treasonous” actions.

In his interview, McCabe confirmed that Rosenstein offered to wear a wire to “collect evidence” about Trump’s motive for firing the FBI director.

Furthermore, according to McCabe, Rosenstein spoke of assembling a majority of the Cabinet to activate the 25th Amendment of the US Constitution to remove Trump from office because he was incapable of holding that position, but neither of those two ideas was carried out.

The Justice Department, however, said in a statement last week that Rosenstein “never authorized” any recording of the president and that he was not “in a position to consider invoking the 25th Amendment.”