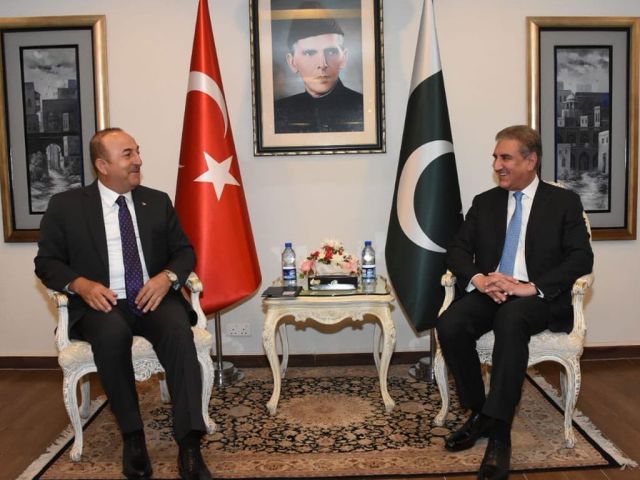 Islamabad : Pakistan Foreign Minister Shah Mehmood Qureshi on Friday said that Turkey has agreed to support Islamabad’s bid for a peaceful resolution of the Kashmir issue at the UN.

Qureshi’s comments came at a joint press conference at the Foreign Office with his Turkish counterpart Mevlut Cavusoglu, who is currently in Pakistan on a four-day visit.

“Turkey stands by Pakistan during its tough times… It supported Pakistan against the Financial Action Task Force’s decision to place Islamabad on the grey list and wants the best solution for the Kashmir issue,” Qureshi was cited as saying by Geo News.

“At the UN conference, there will be a separate conference on Kashmir on the side. It happens every year but it is different this time because a new UN report has come out which sheds light on the (Indian) Kashmir.

“There has certainly been a surge in the interest of people in the human rights abuses that are taking place there,” said the Pakistani minister.

Cavusoglu said it was Turkey’s wish that the Kashmir issue involving India and Pakistan gets resolved in the UN in a peaceful manner, according to Dawn newspaper.

“In the group that has been formed over Kashmir in the UN, we will stand with Pakistan.”

He said that ways to enhance economic and commercial ties with Turkey were also discussed in his meeting with Cavusoglu.

They discussed bilateral ties, regional security including the evolving situation in the Middle East and the management of defence and security cooperation between both the countries, said the military’s media wing, Inter Services Public Relations.