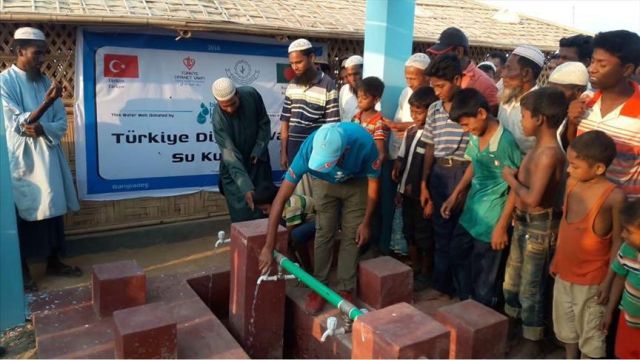 In a statement, the foundation said the water well, which functions with solar panels, was opened next to the masjid which was also built by the foundation.

Speaking to Anadolu Agency, Abdullah Ucak, Bangladesh coordinator for the foundation, said Rohingya families were invited to the opening ceremony of the water well.

Ucak said that the families expressed gratitude and prayed for the foundation.

There are nearly 350 Rohingya families that will benefit from the 2,000 liters of water tank, Ucak said.

Additionally, 12 fountains were built next to the water well for ablution.

Since Aug. 25, 2017, more than 750,000 refugees, mostly children, and women have fled Myanmar and crossed into Bangladesh after Myanmar forces launched a crackdown on the minority Muslim community, according to Amnesty International.

The refugees are fleeing a military operation in which security forces and Buddhist mobs have killed men, women and children, looted homes and torched Rohingya villages.

In a report, UN investigators said such violations may have constituted crimes against humanity.