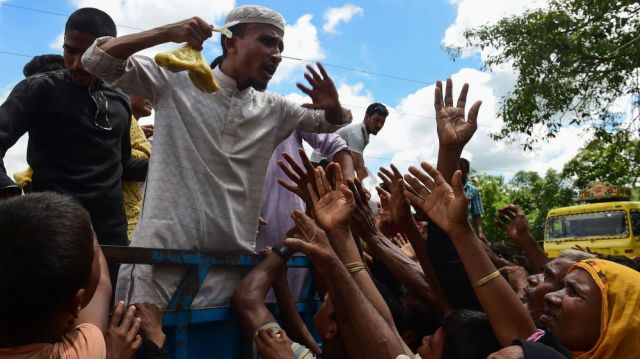 Dhaka : The UN World Food Programme (WFP) on Friday condemned the food insecurity faced by the 655,500 Rohingyas who fled to Bangladesh from Myanmar since an outbreak of violence in August last year.

“Although more than 90 per cent of Rohingya refugees in Cox’s Bazar (a district in southeastern Bangladesh where the refugee camps are located) have received emergency food assistance, a major concern is limited access to a well-diversified and balanced diet,” the WFP said in a statement.

A study carried out by the agency between November and December, titled “Rohingya Emergency Vulnerability Assessment”, revealed that 80 per cent of the overall refugee population was either highly or entirely reliant on life-saving assistance, Efe news reported.

“WFP’s food distributions to the new arrivals is rice, vegetable oil and lentils — an emergency ration designed to provide basic calories, but lacking in dietary diversity,” the WFP said.

It recommended the expansion of its e-voucher programmes, under which the refugees receive a monthly ration on a pre-paid debit card which can be used in allocated shops to buy different foods.

Some 90,000 people are currently enrolled in WFP’s e-voucher programmes.

According to the UN Inter Sector Coordination Group, some 655,000 Rohingya refugees have arrived in Bangladesh since August 25, 2017.

The exodus was triggered by the Myanmar security forces launching an operation in retaliation to an attack by the Arakan Rohingya Salvation Army (ARSA) on several security posts in Rakhine state.

The governments of Bangladesh and Myanmar earlier reached an agreement on the process of repatriation for the Rohingya refugees who fled to Bangladesh, which is expected to begin in the coming months.

Several human rights organisations, however, have repeatedly denounced that conditions were not appropriate for the safe return of the Rohingyas to Myanmar, where, according to recently-arrived refugees, the military campaign against them was still ongoing.

The UN and human rights organisations pointed out clear evidence that abuses were committed, while the UN High Commissioner for Human Rights Zeid Ra’ad Al Hussein described the situation as “genocide”.