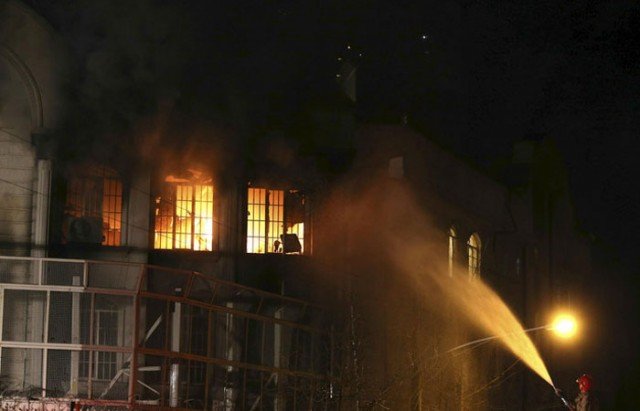 New York :  The U.N. Security Council on Monday strongly condemned an attack on the Saudi embassy in Tehran and its consulate in Mashhad by angry protesters.

The statement by the 15-member council made no mention of the execution of Nimr al-Nimr and called on Iran to protect diplomatic personnel and property. Saudi Arabia cut off diplomatic ties with Iran on Sunday after protesters ransacked and set fire to the Saudi Embassy in Tehran and the consulate in Mashhad, AFP reported.
“The members of the Security Council condemned in the strongest terms the attacks against the Kingdom of Saudi Arabia’s embassy in Tehran, and its Consulate General in Mashhad in the Islamic Republic of Iran, which resulted in intrusions into the diplomatic and consular premises, causing serious damage,” said the council statement.
Expressing “deep concern” over the attacks, the council “called on the Iranian authorities to protect diplomatic and consular property and personnel, and to respect fully their international obligations in this regard.” Council members urged the sides to “maintain dialogue and take steps to reduce tensions in the region.”

Saudi Ambassador Abdallah al-Mouallimi had earlier urged the council to “take all appropriate measures to ensure the inviolability of diplomatic facilities and the protection of all Saudi diplomats in Iran.” Riyadh also defended the execution of 47 men including Nimr, saying in a letter to U.N. Secretary General Ban Ki-moon that they were “granted fair and just trials without any consideration to their intellectual, racial or sectarian affiliation.”
International fears were growing that the Saudi-Iranian rift would derail peace efforts in Syria and Yemen and two U.N. envoys were dispatched to Riyadh to keep diplomatic gains afloat.

However, Mouallimi said there was not cause for concern as Saudi Arabia saw no “effect” to the break with Iran on Yemen and Syria. “From our side, it should have no effect because we will continue to work very hard to support the peace efforts in Syria and Yemen,” Mouallimi told reporters.—-IINA