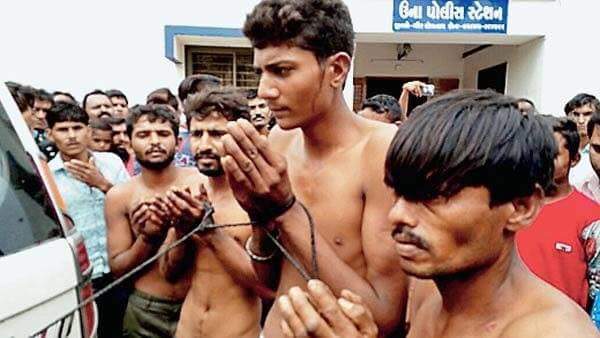 Ahmedabad, July 25: The brutal thrashing of four Dalit youths by self-styled cow protection vigilantes is no isolated incident in Gujarat. As many as 409 incidents of atrocities on Dalits were reported till April this year.

And it took the July 11 Una incident and the national outrage it caused for the police to arrest six similar vigilantes who had similarly attacked nine Dalits in Rajula town in Amreli district in May.

The State Crime Records Bureau has on record around 14,500 cases of attacks on Dalits since 2001, making an annual average of over 1,000 cases with at least three cases daily in Gujarat.

Dalit rights activists say the sense of impunity spawns from the fact that the conviction rate is as low as 3 to 5 per cent.

On the afternoon of May 22, a contingent of cow vigilantes swooped down on a colony of Dalits in Rajula in SUVs and two-wheelers. Like in Una, they carried staffs and knives. A couple of them had swords.

The vigilantes broke the hands and legs of the Dalits, pushed and kicked them around, says Rameshbhai Babariya, a Dalit rights activist in the area. Premabhai Rathod was also hit on the head.

Like in Samadhiya in Una, here too the toughies nonchalantly shot the atrocity they committed. But the police refused to accept the video when Rathod and others took it to them while lodging their complaint.

What is more, the Dalits were skinning cattle carcasses, and not live animals, at a place allotted to them officially by the local municipality for this purpose.

“Do you think we are going to believe any such nonsense (video) that you bring?” Rathod quoted the policemen at the Rajula police station as saying. The police registered the complaint only the next day, that too against 19 persons while more people were allegedly involved.

No action was taken after this. The activists and villagers went to the police station again on May 31.

“We had lost all hope of the police doing anything. There was another round of thrashing too in front of the police,” Rathod says.

The Dalit activists, led by Babariya, took out a big motorcycle procession covering 70 km from Amreli to Rajula on July 7 to demand arrests in the case.

“Then the Samadhiyala (Una) incident occurred on July 11. Now the police got scared and they immediately got into action and arrested six persons. Earlier they used to tell us that everyone was absconding and they had not been able to find any one,” Babariya told IANS.

“There are many more. But at least they have picked up six persons, even if late,” he added.

Three Dalit youths were shot dead in police firing — it was learnt later that AK-47 rifles were used — in Thangad town in Surendranagar district in 2012.

The killings triggered a lot of noise, nothing more.

But a fortnight ago, the CID (Crime), which had been entrusted with the investigation, filed a summary report in the Gujarat High Court saying no offence had been found against anyone.

“In all atrocity cases, a chargesheet has to be filed in 60 days. It has been four years, it has yet not been filed,” says Dalits activist and lawyer Jignesh Mewani.

Three policemen were arrested and released on bail. A police official has been on the run for the last four years in the case.

After many complaints, the Gujarat government told Principal Secretary Sanjay Prasad to probe the case. His report was submitted in 2013 but it has not been made public.

When RTI activist Kirit Rathod asked why, he was told the report cannot be made public since it “may harm the sovereignty and integrity of the country and incite hatred among sections of the society”.

In 2012 too, this was no isolated case. A Dalit youth was burnt to death in a house in Una. It was dismissed as an honour killing.

But the victim’s family alleged that it was a case of land grabbing by the culprits. A verdict is expected soon from the trial court.