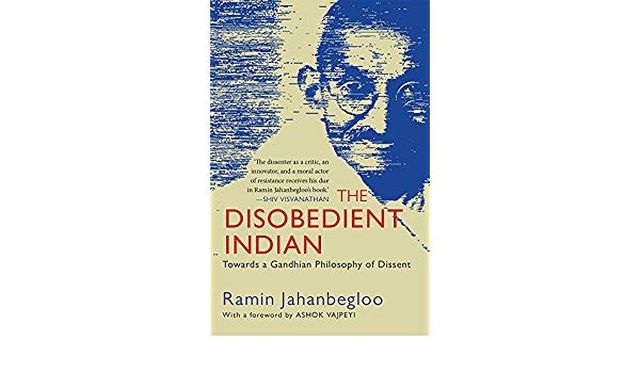 Iconic as he was, the life and times of Mohandas Karamchand Gandhi continue to attract scholars and researchers for relevant lessons in contemporary times even some seven decades after his assassination. The latest attempt comes from philosopher and academic Ramin Jahanbegloo, who has attempted to highlight a lesser explored facet of the Mahatma — the dissenter.

Setting the record straight in his introduction to the offering, Jahanbegloo points out that disobedience is far from being “an invitation to chaos and violence”; instead, he notes, it is “a constructive and creative attitude” that can go a long way in the pursuit of, what he calls, “a self-reflecting and non-conformist community”.

“In a deeper sense, it is a serious and conscientious commitment to explore new vistas of change and exchange for our common life, in a time when populism and mass immaturity are holding each other in a sway,” notes the Iranian-Canadian philosopher, who has authored 28 books till date and is currently the Executive Director of Mahatma Gandhi Centre for Nonviolence and Peace at the Jindal Global University here.

The first part of the book explores the formulation of disobedience throughout history by looking at and critically examining works by scholars and thinkers such as Henry David Thoreau, who was himself one of the greatest influences on Gandhi’s practise of nonviolence and disobedience; George Woodlock, who declared that humanity would not be enslaved so long as men continued to disobey; and, among others, Greek-French philosopher Cornelius Castoriadis, best known for authoring “The Imaginary Institution of Society”.

In this section, the idea of dissent and the practise of disobedience is minutely observed, and then dissected, point by point, from the pages of history. Separating protest from dissent, the acclaimed author narrates the journey that disobedience, both as a principle and as a political tool, has travelled so far.

In doing this, fortunately, Jahanbegloo does not ignore that first-time reader — who may not have been introduced to the writings on the subject — and provides background on what dissent and disobedience mean, and how they have been interpreted and propagated by academics and scholars, as also their use as a political tool over the course of history.

“This is where a look back at the Gandhian philosophy of resistance becomes a call to political wisdom,” he asserts.

Jahanbegloo reminds the readers, by quoting Gandhi extensively, of his firm belief in the fact that every citizen is ultimately responsible for every act of the state. “This,” the author notes, “is the most extreme act of disloyalty in modern politics. It destroys our habits of willing obedience to the state, but it also changes the whole definition of a law-abiding citizen”.

So is a disobedient Indian a law abiding citizen?

The answer is not revealed, at least openly, but this particular section of the book makes elaborate references to Gandhian beliefs and principles, before dwelling on Bapu’s civil disobedience movement. Readers are bound to ask: What else was Gandhi if not a disobedient Indian?

Jahanbegloo then explores the Gandhian philosophy of dissent in the context of present times. Contending that Bapu was the arch dissenter of the 20th century, he points out that Gandhi never accepted “the idea of consent as a common justification of political obligation” and quotes him on “legitimation of the state” to establish his point.

The author maintains that the idea of disobedience was an innovative one for Gandhi. According to Jahanbegloo, Gandhi’s idea of dissent and Gandhi as a disobedient Indian, were not merely a critique of authorities but also a revolution of values.

As Ashok Vajpeyi notes in the foreword: “For him (Gandhi), ‘disobedience, as a spirit and as an act has an ethical significance more than just a tactical value in non-violent struggle’.”

The book will remind readers of the inherent fragility of human existence and the frailty of the human political condition while also serving as a reference point for future studies on Gandhi, particularly in the context of his positions on dissent and the law abiding citizen.

Written with extensive research and backed by a notes and reference section, the book makes its evidences available for the reader to cross-check the facts and quotes used by the author. Even as it deals with a heavy subject as this, it has been written in simple language and will be accessible for most readers.