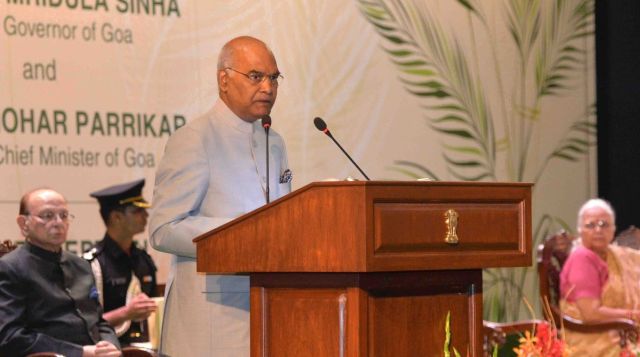 Panaji : President Ram Nath Kovind on Saturday praised the practice of the Uniform Civil Code in Goa, saying that implementation of the socio-legal system was truly reflective of the values of equality in the Indian Constitution.

In his address during a civic reception here, he also said that the seaward region’s constant brush with people from different countries across the world, over ages, had earned the natives of Goa the tag of “global citizens”.

“I am happy to know that the government in Goa is laying special stress on empowering women… Goa has a common civil code, as a result of which all residents, men and women, have been given equal rights. This Code reflects the principle of equality in our Constitution and presents a good example to the country,” said Kovind, who is on a two-day visit to the coastal state.

Implementation of the Uniform Civil Code has been a key poll campaign promise of the Bharatiya Janata Party and Goa is the only state in the country, where the Code has been in existence since the pre-Liberation era.

Kovind said that the state’s exposure over time to global influences had a positive impact on the mindset of the local population, making them global in outlook.

“Because of the natural beauty, environment, its coastline, for ages Goa has been attracting people across the world. It has been important centre for international trade in the past. From Japan in the East to Africa and Western Europe, people from various countries have been visiting Goa. The extensive contact with the rest of the world has resulted in an evolved mentality, making Goans global citizens in the truest sense,” he said.

Inviting Goans to visit the Rashtrapati Bhavan, Kovind said that his official residence belonged to each citizen of the country.