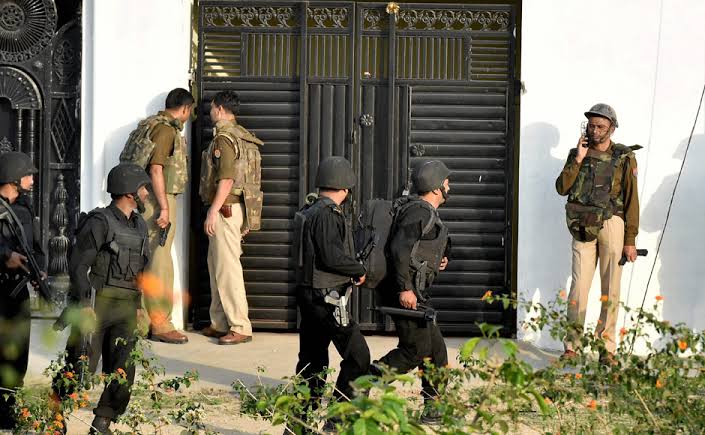 LUCKNOW: The UP Anti-Terrorist Squad (ATS) on Sunday arrested two alleged terrorists linked to Al Qaeda from Kakori on the outskirts of Lucknow.

UP ATS Inspector-General G.K. Goswami, who led the seven-hour operation, claimed that the suspects were planning serial blasts in the state capital and other cities in the coming days.

He told reporters that arms, as well as live bombs including pressure cooker bombs, detonators and 6 to 7 kg of explosives had been recovered from the house where they were hiding.

A bomb disposal squad was summoned to the site and nearby houses were evacuated. Goswami claimed that the suspects had links with Kashmir also.

Briefing reporters, ADG, Law and Order, Prashant Kumar said that the arrested persons had been identified as Minhaz Ansari, 32, and Maseeruddin, 50.

He said that based on information gathered from initial interrogation, raids were being conducted at various places to arrest their accomplices.

However, he refused to divulge the source that tipped them off about the terror plan. The ADG said that the arrested persons were members of Ansar Ghazwat-ul-Hind, a Kashmiri wing of Al Qaeda that is active in Jammu and Kashmir. The outfit was formerly led by Zakir Rashid Bhat who was eliminated by security forces.

He said that their handler was Umar Halmandi from the Pakistan-Afghanistan border, who had radicalized the two.

The ADG said that the two arrested men would not be produced before the court and taken on remand for further investigations.

Meanwhile, security has been beefed up at all vital installations in the state including airports and checking at various highways and bus stations is being carried out. – IANS