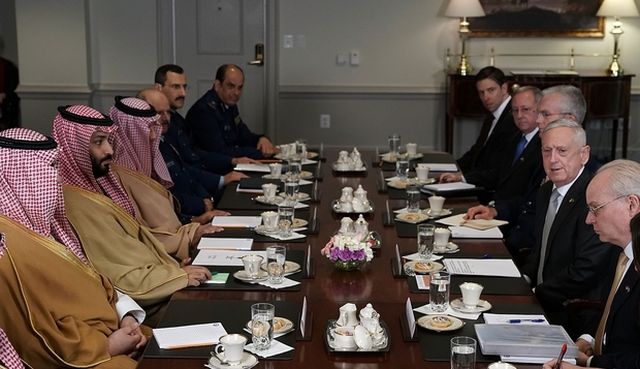 Washington : The US State Department has approved the sale of an estimated $670 million in anti-tank missiles to Saudi Arabia, just hours after Crown Prince Mohammed bin Salman met US Defence Chief James Mattis.

A statement from the State Department on Thursday confirmed approval of “TOW 2B (BGM-71F-Series) missiles for an estimated cost of $670 million” to the Kingdom. Congress was notified of the proposed sale and lawmakers have 30 days to try to stop it, the New York Times said.

The proposed package included up to 6,700 missiles made by Raytheon Missile Systems as well as spare parts for American-made tanks and helicopters that Saudi Arabia already owns.

The statement said the sale “will support US foreign policy and national security objectives by improving the security of a friendly country which has been and continues to be an important force for political stability and economic growth in the Middle East”.

The proposed sale is bound to be questioned by Congress where the Senate this week rejected a bipartisan effort to halt US military support for the bombing campaign in Yemen.

The Trump administration strenuously protested the effort and sent Pentagon and State Department officials to Capitol Hill last week to lobby against its passage.

In the end, the administration prevailed and lawmakers from both parties shelved the measure for further debate by the Senate Foreign Relations Committee, according to the Times.

Hours earlier, Prince Mohammed met Mattis, who characterized Saudi Arabia as “part of the solution” in Yemen, which has been ripped apart by civil war.

He said Saudi Arabia supported the government in Yemen’s capital Sana, which is recognized by the UN. “We are going to end this war. That is the bottom line,” Mattis said.

“And we are going to end it on positive terms for the people of Yemen but also security for the nations in the peninsula.”

Pentagon spokeswoman Dana White said Mattis did not bring up the mounting civilian casualties in Yemen during his discussion with Prince Mohammed.

Instead, she said, the Defence Secretary discussed the continued cooperation between the US and Saudi Arabia through additional training and military education.