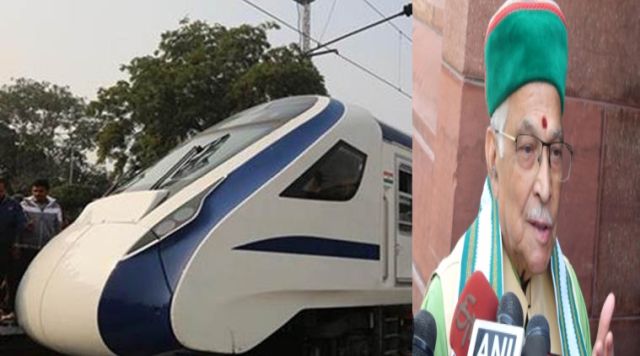 “I am very happy that Vande Bharat (formerly Train 18) is an icon of our engineering efficiency and skills,” the former Union Minister told IANS on board the train that touches 160 km an hour, the fastest on Indian Railways.

“This train passes through Kanpur, which I represent in the Lok Sabha now, Prayagraj and Benares which I had represented in the past. This train originates from Delhi, my place of birth,” Joshi said.

He said he was also happy that this train was a culmination of the seeding of a vision for a future railway system which may lead to the development of a bullet train that will be completely designed and manufactured in India.

“We should be prepared to face the challenge and make improvements in our engineering skills and economies of scale so that its acceptability is for all. The fares should be acceptable for the poor sections too.

Joshi also said that all political parties should take a unified approach on combating Pakistan-sponsored terrorism without trying to score political points.

“I feel the country must take a unified stand on whatever decisions (are taken) to combat Pakistan-sponsored terrorism without any difference of opinion. All parties should devise a common approach and wholeheartedly join them.

“No place should be allowed to support terrorism and bigotry and no one should try to draw political benefit at the cost of the country’s interest,” Joshi told IANS on board the train that links New Delhi and Varanasi and was flagged off by Prime Minister Narendra Modi on Friday morning.

Joshi was reacting to the worst ever terror attack on security forces in Jammu and Kashmir on Thursday that left 45 CRPF troopers dead at the hands of a suicide bomber in Pulwama district.

Joshi described Thursday’s incident as a ghastly attack which deserved condemnation of not only in India but everyone across the world to create an international bulwark for crushing terrorist elements.

“These are aspects of international consolidation of democratic and peaceful societies.”

Second, Joshi said, terrorist elements and tendencies should be identified in the country and such platforms should be demolished.

For this, psychological efforts were needed to change the mindset of people, especially youth, to create abhorrence for violence.