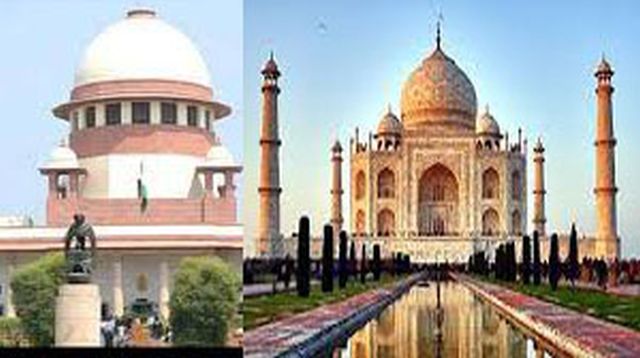 New Delhi : Slamming both the Central and Uttar Pradesh government for the neglect of Taj Mahal, the Supreme Court on Thursday wondered what if Unesco drops the 17th century Mughal monument from its list of world heritage sites.

“It is a world heritage site. What will happen if Unesco say that we withdraw the world heritage title,” asked the bench of Justice Madan B. Lokur and Justice Deepak Gupta.

Asked if the authorities concerned have filed the management plan for the protection and preservation of the heritage site, Justice Lokur said: “It is very very difficult to understand something that is happening. Something is said on affidavit, something is said orally and something otherwise. It is unacceptable.

Coupled with this, the court also wanted to know which was the authority responsible for the protection and preservation of Taj as it found that the three affidavits filed before it were by the Uttar Pradesh Tourism Department, second by the Union Environment and Forest Ministry and third by some other authority.

As senior counsel A.D.N.Rao told the court that the Archaeological Survey of India was responsible for the Taj, the court expressed surprise that the it has been kept out of the consultation process for preparing the draft vision document for the protection and preservation of the Taj.

Ordering that a copy of the draft vision document be made available to the ASI and asking its to share it with INTACH, Agha Khan Foundation, ICOMS and other similar entities who have expertise in protecting and restoring the historic monuments, the court also directed the UP government to give a copy of the vision document to petitioner M.C.Mehta for his comments.

Sharing the court’s concern on the possibility of Unesco dropping Taj from the list of world heritage sites, Attorney General K.K. Venugopal told the court that the task involving the preservation and protection of Taj and other adjoining monuments including Agra Fort, Fatehpur Sikri and Sikandra fort at Mathura Ais massive and has to be carried by way of short term, medium and long term plan.

He told the court that short term plan itself would take two years to complete.

At the outset of the hearing, Justice Lokur took exception to Uttar Pradesh government filing the draft vision document asking if the state government expected the Court to “correct it.”

The court was told that the Taj Trapezium Authority was responsible for executing the larger plans fior the protection of heritage monument, Justice Lokur said had it been doing its job, things would not have come to such a pass.

The court directed it be told “categorically and unequivocally” who is responsible for the TTZ.

TTZ is an area of about 10,400 sq km spread over the districts of Agra, Firozabad, Mathura, Hathras and Etah in Uttar Pradesh and Bharatpur district of Rajasthan.

As the Attorney General referred to the draft vision document involving multi-pronged approach to preserve and protect the heritage monument, Justice Lokur confronted him with an affidavit by the Uttar Pradesh government which said that there were 1,167 polluting industries in the area.

Venugopal then sought to clarify that all of them were being operated on clean fuel and UP government’s standing counsel Aishwarya Bhati said it was just the nomenclature to describe them which is in use for long.

This drew the court’s ire.

“They are polluting industries, your affidavit says but you are saying that they are not polluting but by nomenclature they have been described so,” said Justice Lokur.

‘Passed many orders nobody taking action’, SC on plea against hate speech event in Mumbai