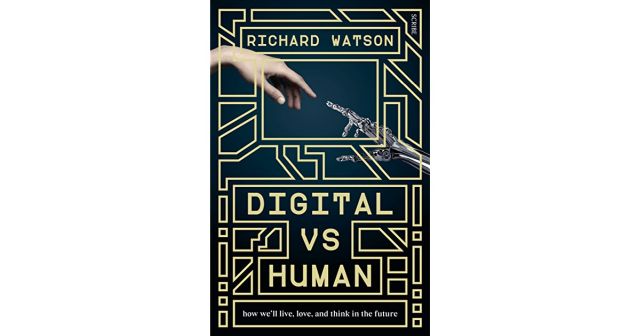 At a time when the rise of digital technology appears almost unstoppable, and machines with Artificial Intelligence (AI) are commanding unprecedented respect from us, are we losing out on the very things that make us humans in the first place? Should we even worry about human extinction?

These are some of the questions futurist Richard Watson poses in his book “Digital Vs Human…” and wants us to ponder about.

To be fair, Watson finds it “highly unlikely” that machines with consciousness and ability to self-replicate will emerge in the near future, but nevertheless, the author, best known for his 2007 book “Future Files”, wants us to be prepared for such a possibility.

“We must be vigilant against the threat of human extinction,” Watson has underlined in his latest book that seeks to introduce the readers to the world they will be inhabiting — in all possibility — by 2050.

And he does not stop at warning us about the threat. To prevent the Sun from waking up a world without humans and to deal with the unseen threat of automation, he argues that agreement is necessary on where, when and why autonomous digital systems are used — for, he thinks that the unchecked rise of automation in every sphere of life is not in our interest.

Digitalisation, Watson writes, tricks us into thinking that physical form and human presence do not matter. To drive home the point, he gives the example of a South Korean couple — Kim Yoo-chul and Choi Mi-sun — who had become so obsessed with raising a digital daughter, named Anima, that they had allowed their actual baby daughter to starve to death.

While display of such extreme emotional connect with digital personas is still a rarity, it is hardly a secret that our affection for digital devices has already taken a huge toll on our health — especially mental health — and relationships. Watson has cited numerous studies in the book to back up his argument.

In fact, in their race to catch up with Facebook, Twitter and other social media updates, and share their own “status”, the whole human race, Watson observes, is becoming somewhat autistic, preferring to live largely alone, interacting only reluctantly and awkwardly with others.

And the days are not far off when robots might replace the ever diminishing number of friends we have today, warns the author, who works with a team of experts at London’s Imperial College whose job is to look ahead to what the next decades could offer as a result of breakthrough discoveries today.

Watson, therefore, thinks the time is now ripe for a moral code, alongside the computer code, that could bind our relationships with technology.

Besides highlighting the societal cost of technology, the book also draws attention to the state of the economy that people would have to deal with in the coming decades. The rising gap between the highest and lowest earning members of society and dismal rate of job growth could be some of the other repercussions that threaten to overshadow the assurance of convenience and efficiency that the digital age promises.

The book also discusses the impact technology could have on areas such as media and communication, healthcare and medicine, transportation, and education, among others.

Watson blames humans for the problems that machines might bring in. He, however, gives the readers hope that despite the growing addiction to digital technology, people may still find a way to resist the temptation of allowing machines to relieve us of the need for thinking and interacting with other human beings. Because deep inside our heart, it is human company that we would continue to value the most.

Watson offers a critique of how people the world over are adapting to digital technology and also discusses what we should want technology to do for us in the future, while offering his own thoughts on what the future might hold for us. Watson does this without falling prey to temptations of stating his predictions with an unquestionable degree of certitude.

The book is easy to read as it avoids use of technical jargon. But it lacks the punch to engage the readers deeply as Watson builds up his arguments mostly by citing some studies here and other expert quotations there, instead of offering the readers a feisty narrative backed by strong logic.

(Gokul Bhagabati can be contacted at gokul.b@ians.in)