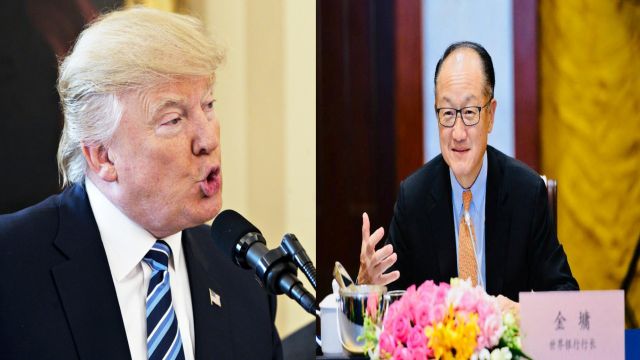 United Nations : World Bank President Jim Yong Kim has announced that he is stepping down as the head of the premier anti-poverty institution putting the likely choice of its future leadership in the hands of US President Donald Trump, a sceptic of international development.

Announcing his decision on Monday, Kim said in a tweet: “It’s been the greatest privilege I could have ever imagined to lead the dedicated staff of this great institution to bring us closer to a world that is finally free of poverty.”

Kim, 59, who is dropping out 19 months into his second term on February 1, would be joining a private company and focus on infrastructure investments in developing countries, the Bank said.

The Bank’s CEO Kristalina Georgieva will become the interim president till a successor to Kim is appointed.

As the largest share-holder, the US by tradition appoints the head of the Bank, while Europeans determine the chief of the International Monetary Fund.

Kim was nominated for the job by former President Barack Obama in 2012.

Before Trump’s election, Kim was hastily re-appointed in September 2016 to a second term that began in July 2017 with an eye on pre-empting a possible Trump nominee getting the job.

Now, however, Trump will get an opportunity to nominate the Bank’s head.

Trump’s role will resurrect and strengthen challenges to the post-World War II model of the leadership of the 189-member bank that has always been determined by the US .

Already the US nominee was challenged for the first time in 2012 by two contenders.

Now there will be robust demands for reconsidering the US leadership of the Bank and stronger non-American contenders for the job.

Kim, a South Korea-born US citizen, was an unusual leader for the Bank: He was a medical doctor by training, a specialist in public health and an academic with a Harvard doctorate in anthropology who had led the Ivy League Dartmouth College.

But his background in health was a plus for the Bank’s mission of fighting poverty and promoting development.

Under his leadership, the Bank adopted in tandem with the UN the goal of ending extreme poverty by 2030 and focusing on the bottom 40 per cent of the population in the developing world.

The Bank’s International Development Association, which funds programmes in the least developed countries, achieved two record replenishments during his tenure, the last one in 2016 for $75 billion.

Last April, the Bank also increased its capital by $13 billion with the unexpected support of the Trump administration.

Kim also pushed the Bank’s cooperation with the private sector for financing development in the developing world, particularly in the areas of climate change and infrastructure.

China, though a part of the World Bank, has thrown a challenge to it by setting up its own development banking institutions.

The Asian Infrastructure Investment Bank (AIIB), founded in 2016 is one of those institutions and several countries including India, Germany, Britain and South Korea have joined it.