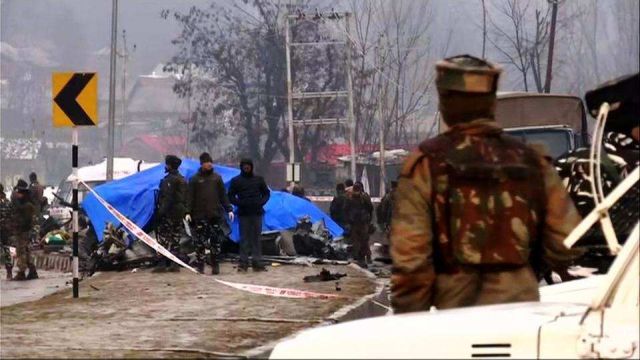 New Delhi : The international community has strongly condemned the terror attack by the Pakistan-based Jaish-e-Mohammed (JeM) in Jammu and Kashmir that killed 45 CRPF personnel, with US President Donald Trump asking Pakistan to “end immediately” the support and safe haven provided to all terrorist groups operating on its soil.

“The US calls on Pakistan to end immediately the support and safe haven provided to all terrorist groups operating on its soil, whose only goal is to sow chaos, violence and terror in the region. This attack only strengthens our resolve to bolster counter-terrorism cooperation and coordination between the US and India,” Trump’s Press Secretary Sarah Sanders said in a statement.

“We express our deep condolences to the victims’ families, the Indian government and the Indian people for the loss of life in this brutal attack,” the statement added.

China’s Foreign Ministry on Friday also denounced the attack, hoping that “relevant regional countries will cooperate to cope with the threat of terrorism and jointly uphold regional peace and stability”.

It added that the “JeM has been included in the UN Security Council terrorism sanctions list and that China will continue to handle the relevant sanctions issue in a constructive and responsible manner”.

An operative of the JeM group crashed a car bomb into a convoy of the Central Reserve Police Force (CRPF) in Pulwama district on the Srinagar-Jammu Highway on Thursday, making it the worst ever attack on security forces on any single day since a separatist campaign broke out in Jammu and Kashmir in 1989.

Afghanistan’s President Ashraf Ghani and Chief Executive Abdullah Abdullah stressed the “need for solidarity and closer cooperation of countries in the fight against this common enemy”.

“Terrorism is a cancer in the region and it requires collective efforts to root it out,” Ghani said.

Russian President Vladimir Putin, in a message to Prime Minister Narendra Modi strongly condemned the “brutal crime” and said that “the perpetrators and sponsors of the attack, undoubtedly, should be duly punished”.

The European Union in a statement said that “as a strategic partner of India, the EU reaffirms its full solidarity at such a difficult moment”.

Saudi Arabia also denounced the “cowardly” attack and said it stands with India against terrorism and extremism.

Canadian Foreign Minister Chrystia Freeland said her country “remains steadfast in its support of the global fight against terrorism,” reaffirming a resolve “to prevent radicalization and defeat terrorism in all its forms”.

The attack further damaged the already tense India-Pakistan diplomatic relations, with New Delhi saying it had evidence of Islamabad’s involvement in the carnage. It also withdrew the Most Favoured Nation trade status it had granted to Pakistan in 1996 under the World Trade Organization rules.

However, Pakistan dismissed accusations that it has links with the militants who carried out the attack. “We strongly reject any insinuation by elements in the Indian government and media circles that seek to link the attack to the State of Pakistan without investigations,” said the country’s Foreign Ministry in a statement.