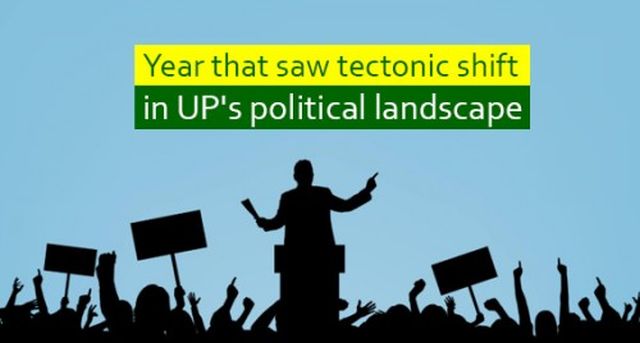 Lucknow : A year is a long time in politics. In Uttar Pradesh, the change of the calendar from 2017 to 2018 saw a tectonic shift in the political landscape, one that left the ruling BJP and its cadres shocked to the core. Mayawati, the Dalit powerhouse who was daggers drawn with arch rival, the Samajwadi Party (SP), since June 2, 1995, after a murderous attack on her at a guest house by its supporters, decided to bury the hatchet and join ranks with the party.

This was by far the biggest development in UP this year as Mayawati’s Bahujan Samaj Party (BSP) and the SP were sworn enemies for decades — using their stints in power to make flyovers next to the residences of each other, downgrade the other’s security cover, get political leaders bashed up by the police and what not. The Bharatiya Janata Party (BJP) had been benefitting from the divide and would often gleefully boast that as the “twain shall never meet” it would give the saffron camp increased seats, election after election.

Mayawati and Akhilesh Yadav are now glued to each other in their hatred for Prime Minister Narendra Modi and haunted by the spectre of his again returning to power in 2019. Political observers here say that this was the “only option before the regional satraps as they fought for survival and not success anymore”. And, as the Modi juggernaut rolled on, the BSP scored a duck in 2014 and the SP managed to win only four of the state’s 80 Lok Sabha seats. The SP got under 50 seats and was booted out of power in the 2017 state assembly polls, while the BSP was reduced to 19.

The new understanding between the two seemed to have found favour with the voters who threw their lot behind the duo after which SP candidates romped home winners in the Gorakhpur, Phulpur and Kairana parliamentary by-polls. Having tasted blood, the two parties now have more or less cemented a seat-sharing agreement for the 2019 Lok Sabha polls. Tackling a whimsical Behenji, Akhilesh Yadav knows, is not an easy task — but he, unlike his father Mulayam Singh Yadav, is ready to bend backwards to see the alliance through.

Even BJP chief Amit Shah has conceded that the coming together of the SP and BSP would cost the party dearly in UP. The mandarins in the BJP camp, however, are now working the wires to ensure that this does not become a reality and a nightmare for them.

“From the ED (Enforcement Directorate) to the CBI (Central Bureau of Investigation) to other factors, all are at work — but we are determined to decimate the BJP this time,” said an informed source in the SP who is privy to the seat-sharing talks. And so, while the hostility between the Jatavs (the BSP vote bank) and Yadavs (SP’s electoral backbone) continues to simmer, hopes of the alliance arithmetic percolating down to the grassroots is not lost on both the parties.

The other significant change in the opposition camp this year was the parting of ways of Shivpal Singh Yadav from his political alma mater, the SP. A man credited with grooming the SP from scratch to three times in power finally threw in the towel after being completely sidelined by his estranged nephew and party chief Akhilesh Yadav. As a first step to breaking ranks with his party of 26 years, he formed a front but finally took the plunge and floated his own political party named Pragatisheel Samajwadi Party (PSP).

While his elder brother, Mulayam Singh Yadav, has been swinging like a pendulum between both the factions, sometimes making a guest appearance at SP events and also turning up at a PSP rally, party veterans seem to be siding with Shivpal Singh Yadav, who is extremely popular with workers and middle-rung leaders. Deepak Mishra, the spokesman of the PSP, told IANS that, in a short span of time, it is “ready with its organisational structure and is upbeat about contesting all 80 LS seats in UP”.

He also termed as opportunistic the SP-BSP alliance. “We have the old guard, the real socialists, with us who have been fighting the communal forces for years,” he claimed, adding that any party or formation will not be able to take on the BJP without the PSP’s support.

Another significant churn in politics this year was caused by the floating of his own party by independent MLA Raghuraj Pratap Singh, aka Raja Bhaiyya.

The Kunda legislator, for the last 25 years, has been the favourite pick and essential part of almost all governments, barring Mayawati’s. This time has decided to form his own party and contest all 80 Lok Sabha seats. Having christened his party Jansatta, he said his aim was transfer power to the people. In his initial public outings after declaring his party, Raja Bhaiyya has been wooing the upper castes by drumming up the fear of the SC/ST Atrocities Act and has openly declared the legislation was potentially a big threat to the “savarns” (upper castes).

With all political parties in the state tilting towards the OBC and Dalits, Raja Bhaiyya hopes to corner the upper caste votes from the Congress and the BJP. Insiders said his electoral foray is backed by the BJP, which feels that certain upper castes — Brahmins and Thakurs — could go to the Congress because of the Act. In such a grim scenario, they would prefer to shift the vote to Jansatta rather than the Congress.

Raja Bhaiyya’s ideological proximity to the saffron camp is well known. He has been thrice minister in BJP governments in UP.

As the year draws to a close, a lot of political activity has happened in the state, enough to make 2019 an interesting year as the race for the Delhi Durbar hots up.