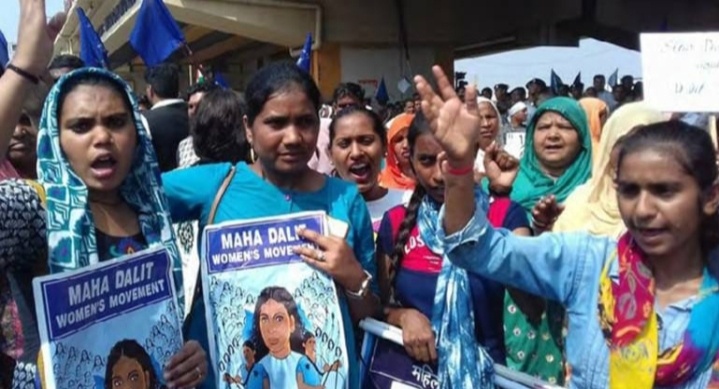 Despite a plethora of laws, it is a known fact that Dalits have been at the receiving end since centuries at the hands of caste Hindus. The latest report  revealed that  around 80 per cent of the sexual violence cases against Dalit women and girls were committed by men from dominant castes in Haryana.  The report also revealed that  only 10 percent of cases ended with the successful conviction. Moreover, convictions were obtained against all accused persons involved in either rape or murder was committed against girls under the age of 6.

The report titled as ‘Justice Denied: Sexual Violence and Intersectional Discrimination – Barriers to Accessing Justice for Dalit Women and Girls in Haryana’ stated many harsh realities. It was prepared by Swabhiman Society, a grassroots organization led by Dalit women, and international women’s rights organization Equality Now.

The report examined 40 rape cases involving Dalit women and girls, which occurred over a span of 12 years, from 2009 – 2020. It comes as a reaction of gang rape of a 19-year-old Dalit girl in Hathras, who died due to the injuries caused by it.

It  highlighted the 2019 National Crime Records Bureau data, which stated that in Haryana, where Dalits make up around one-fifth of the state’s population, women are raped every day. The cases studied were taken from 11 out of Haryana’s 22 districts.

Swabhiman Society is active in these districts and providing legal  help to the  survivors of sexual violence. The highest number of cases reported  from Hisar (seven cases) and Kaithal (six cases). There were also five cases each from Sonipat and Kurukshetra districts.

According to the report in over 80% of the cases, all the accused s involved in the case were from a dominant castes, and in over 90% of cases, at least one of the accused persons was from a dominant caste. These findings mirror official data from the Haryana SCRB in 2019, which show that in 105 cases of rape against Dalit women, the perpetrators were from a non-Scheduled Caste community in 88.5% of the cases.

In 32.5% of the cases, the survivor and sometimes her family were forced to leave the village or neighborhood due to the stigma surrounding the rape incident and/or community pressure. Some 27.5% remained in their homes and data is unavailable for 40% of the cases.

In many cases, the survivor and sometimes her family were only able to continue living in the village because they had agreed to a compromise. Another finding of the report is that in a number of cases, the education of the survivor (even the survivor’s children in the case of rape against adult women) is interrupted, sometimes permanently. Families withdraw girls from the school in the aftermath of such cases fearing reprisals, which means their daughters are kept confined to the home or get married to the relative groom.

The report is eye-opener to what is happening with Dalit communities particularly   with their women and girls.  There  seems to be  no end to their miseries despite a host of laws were enacted to protect Dalit and their dignity.

Another Dalit woman gangraped and killed in UP’s Balrampur