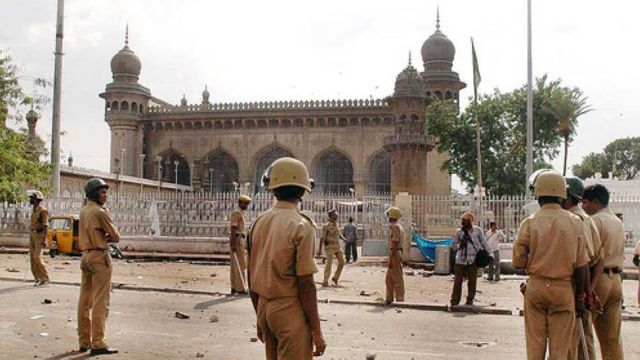 New Delhi / Hyderabad: Reacting to the special NIA court verdict in the Makkah Masjid blast case, top Muslim body All India Muslim Majlis-e-Mushawarat (AIMMM) Tuesday said the acquittal of RSS former Pracharak Swami Aseemanand and four other members of Hindutva outfit is “travesty of justice and a sign that criminal justice system has collapsed in the country.” It demanded that demanded that the government should immediately file a review petition to challenge the acquittal in competent court to “prove its neutrality and seriousness to tackle terrorism and terror cases.”

Expressing his ‘deep anguish and sorrow over the acquittal of the accused, Mushawarat president Navaid Hamid alleged that “it happens only because of the total connivance of the Public Prosecutor with the culprits and under the directions of the people in government.” He underlined that that the NIA court has totally ignored the confession of the main accused Swami Aseemanand given before a magistrate and he also alleged in an interview to a magazine that the RSS leadership including its Chief Mr. Mohan Bhagwat had supported the terror attacks.”

It is no wonder, since the BJP became to power in 2014, the Hindutva-terror accused charged under various sections of anti-terror laws have been regularly coming out of jails on bails just because of their association with saffron groups and weakening of their cases by the government, he said.

“The latest Acquittal is not a judicial decision but as seems to be a cruel political decision to save the Saffron Hindutva Terrorists and is an attempt to wash away the open secret that Hindutva groups and hate organizations have nothing to do with terror activities,” Hamid said.

Meanwhile the Hyderabad-based right group, Civil Liberties Monitoring Committee termed the verdict as “a mockery of justice”. “It is a matter of fact that it is a very open case and everyone knows who carried out the blast; even the main accused Assemanand had admitted carrying out the blast.”

Lateef Mohammed Khan, Gen. Secretary, alleged that from day one, the police and other investigative agencies were not serious to probe the blast, even in first instance they had implicated Muslim youth in the case. “Immediately after the Makkah Masjid blast, police opened fire on the people helping the blast victims and later blamed the Muslims for the blasts.”

It is to be noted that Assemanand in December 2010 during the investigation had admitted and confessed in front of Metropolitan Magistrate under Section 164 of the Criminal Procedure Code that he was involved with others in carrying out the blasts at Muslim places but later he became hostile and it should also be noted that the documents regarding the confessional statements were misplaced in the trial court which were very crucial evidences against the criminals, Khan said.

He said “the NIA court verdict has shaken the confidence of the Muslim community from the Judiciary and a sense of injustice prevailing in the community because judiciary did not apply its mind in this case.”