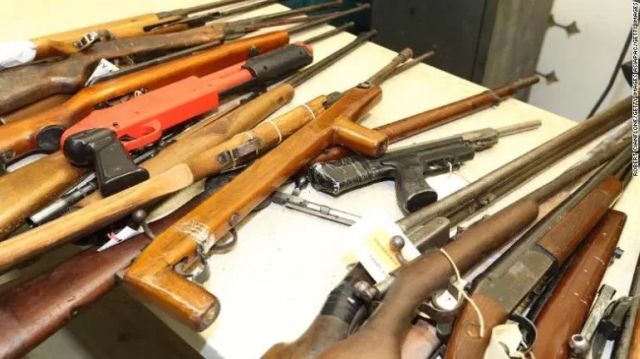 Canberra : At least 57,000 illegal firearms were handed in during the three-month national gun amnesty period in Australia, which would help prevent their use in terrorist acts, official sources said on Thursday.

The national gun amnesty, from July 1 to September 30, 2017, was the first of its kind since 1996, when 35 people were shot dead in Port Arthur, Tasmania, reports Efe news.

Minister for Law Enforcement and Cybersecurity Angus Taylor said the results exceeded his expectations and added that almost 2,500 of the total firearms delivered were semi-automatic or fully-automatic.

The minister also expressed satisfaction over the large number of firearms seized from the “grey market”, referring to unregistered weapons owned by criminals.

About a third of the total weapons, most of them rifles, were destroyed.

This was the first nationwide campaign on illegal firearms since the Port Arthur massacre in Tasmania, which left 35 people dead in 1996, prompting purchases of almost 700,000 illegal weapons as part of the gun control laws enacted after the tragedy.

After the Port Arthur incident, the Australian Government approved the current National Firearm Agreement, which regulates gun control in the country through a firearm-licensing system and prohibits the sale of all automatic and semi-automatic weapons.

Due to this law, the number of gun-related crimes in Australia has shrunk considerably.

Australia has suffered several terrorist attacks involving firearms, including the 2014 Sydney hostage crisis in which two hostages and the gunman were killed, and the 2015 Parramatta shooting, in which a 15-year-old boy shot and killed an accountant of a police station in New South Wales.