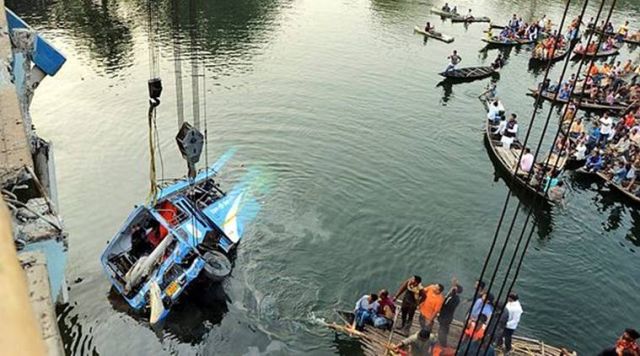 Kolkata : The toll in the bus accident in West Bengal’s Murshidabad district went up to 42 on Tuesday as rescue workers recovered six more bodies from a canal into which the vehicle had fallen, an official said.

The bodies have been sent to Baharampur Medical College and Hospital (BMCH) for autopsy.

As many as 35 of the corpses have been identified, police said.

The Malda-bound bus with more than 50 passengers crashed through a bridge and plunged into the Gobra Canal in Murshidabad’s Balirghat area on Monday.

As many as 34 bodies were recovered from the canal till Monday night after which the rescue operation had to be suspended due to darkness.

Two of the nine injured passengers died in the hospital later on Monday while the condition of the other seven still remain critical.

On Tuesday, divers carried on with the operation to look for those who are still missing. Anxious relatives of the missing passengers were still crowding the spot, hoping against hope that their near ones would be found alive.

The reason for the accident is yet to be ascertained.

One of the accident survivors said he saw the driver talking on phone while driving just before the accident occurred.

“I saw he was using his cell phone while holding the steering with his left hand. I asked him to be careful as the bus was going at a high speed. Moments later, it crashed against the railing and fell into the driver,” the shaken passenger recalled.

Another passenger claimed the accident occurred as the driver tried to overtake a bus at break-neck speed.

The shattered bus was lifted out of the canal by deploying four cranes, with hundreds of villagers and anxious relatives of the passengers gathered on the canal banks.

West Bengal Chief Minister Mamata Banerjee flew to the spot by helicopter along with Transport Minister Subhendu Adhikari and announced a compensation of Rs 5 lakh each to the bereaved families. She also announced Rs 50,000 to Rs 1 lakh for the injured.

The Chief Minister has also asked officials to examine the structural condition of the Nalini Buske bridge where the accident occurred.