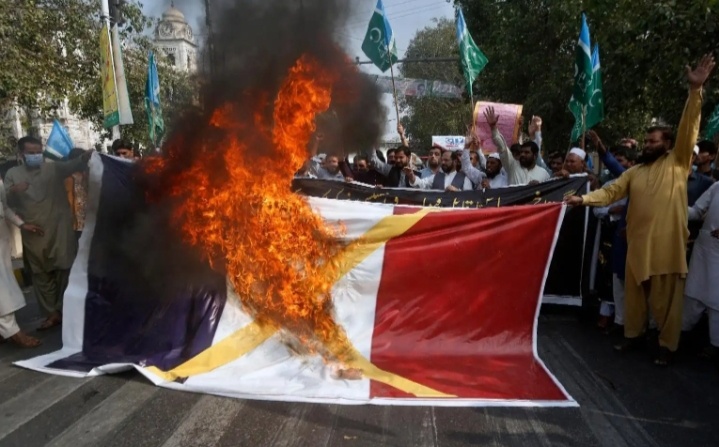 By Barrister M. A. Muid Khan

The alleged carton first published by a Danish Newspaper in 2005 and then by Charlie Hebdo; is one of the Prophet Muhammad wearing a bomb-shaped turban with a lit fuse protruding. This has created a rift between the Muslim worlds and France; as Prophet Muhammad (PBUH) is deeply revered by Muslims and any kind of visual depiction is forbidden in Islam. The caricatures in question are seen by them as offensive and Islamophobic because they are perceived to link Islam with terrorism.

Caricatures of Prophet Muhammad
On 1st September 2020, the French satirical magazine Charlie Hebdo republished cartoons of Prophet Muhammad in early September 2020. On 16th October 2020, an 18-year-old man of Chechen origin beheaded Samuel Paty, a 47-year-old French teacher who had shown pupils cartoons of the prophet in a civics lesson on freedom of speech. He was attacked on his way home from the junior high school where he taught in Conflans-Sainte-Honorine, about 30 kilometres (19 miles) northwest of Paris.

President Emmanuel Macron
On the other hand the French President Emmanuel Macron said it was not his place to pass judgement on the Charlie Hebdo’s decision to reprint the cartoons. “It’s never the place of a president of the republic to pass judgement on the editorial choice of a journalist or newsroom, never. Because we have freedom of the press,” Macron said.

As the French President Macron sparked fury by defending cartoons of the Prophet Mohammed, on 28th October 2020, a group of terrorist murdered three worshippers in France. The Knifeman beheaded two people – an elderly female parishioner and a male church warden in Nice. They also fatally stabbed a second woman and wounded others before being shot and arrested by police.

Meanwhile a guard at the French consulate in Jeddah, Saudi Arabia, was stabbed and wounded by a knifeman. I am expressing my deepest condolence for the victims of lost their lives and injured. This could have been easily avoided if the French President Emmanuel was careful with his speech, which sparked fury in the Muslim World.
On the overhand, ISIS and al-Qaeda supporters call for more attacks against France in sickening online propaganda. These unfortunate killings happened at a time when we are facing the second waves of COVID – 19 attacks in the whole world.

Contrary to International Treaties
In my opinion, the French President Macron’s statement is contrary to the freedom of religion protected by various UN instruments. Article 18 of the 1948 Universal Declaration of Human Rights guarantees freedom of thought, conscience and religion, which includes the possibility of manifesting one’s religion.

The International Covenant on Civil and Political Rights reinforces this protection. Article 3 of the 1951 Convention Relating to the Status of Refugees establishes the principle of non-discrimination, and freedom of religion is enshrined in Article 4.

Subsequently, in 1992, the UN General Assembly adopted the Declaration on the Rights of Persons Belonging to National or Ethnic, Religious and Linguistic Minorities, 20 Article 1 of which obliges states to protect “the existence and the national or ethnic, cultural, religious and linguistic identity of minorities within their respective territories […]”. The Declaration also provides for the freedom to profess one’s religion and calls on states to take measures to protect this freedom.

The French President Macron’s statement is not only contrary to all these international legal instruments but also contrary to the Preamble of the Charter of the United Nations, which begins with the words “We the peoples of the United Nations determined to save succeeding generations from the scourge of war, which twice in our lifetime has brought untold sorrow to mankind.” French President Macron’s statement would not save the succeeding generations from the scourge of war as it has sparked fury in the Muslim World.

The French President Macron’s statement is also contrary to the provisions of Article 18 of the Universal Declaration of Human Rights which stipulates that, “Everyone has the right to freedom of thought, conscience and religion; this right includes freedom to change his religion or belief, and freedom, either alone or in community with others and in public or private, to manifest his religion or belief in teaching, practice, worship and observance”.

His statement also violates the provisions of Article 9 of the European Convention of Human Rights which stipulated that, “… Everyone has the right to freedom of thought, conscience and religion; this right includes freedom to change his religion or belief and freedom, either alone or in community with others and in public or private, to manifest his religion or belief, in worship, teaching practice and observanc…Freedom to manifest one’s religion or beliefs shall be subject only to such limitations as are prescribed by law and are necessary in a democratic society in the interests of public safety, for the protection of public order, health or morals, or for the protection of the rights and freedoms of others….”

The French President Macron’s statement is also contrary to the provisions of Article II of the Constitution of 1958 which states that, “France is an indivisible, secular, democratic and social Republic, guaranteeing that all citizens regardless of their origin, race or religion are treated as equals before the law and respecting all religious beliefs” His careless statement violated the Freedom of religion guaranteed by the French Constitution.

Islamaphobia in France
France was the first country in Europe to ban Islamic face veils, such as the burqa and the niqab, in public places in 2010. In 2014, the European Court of Human Rights upheld the ban but said the law could appear excessive and encourage stereotyping. France was also embroiled in a row over bans on the burkini, a full-body swimsuit for Muslim women, in resorts around the Riviera. Since then, French Muslims have growing concerns, saying that decisions taken by some municipal authorities to ban the burkini could lead to the further stigmatization of Muslims.

France has the largest Muslim minority in Europe, estimated at 5 million or more out of a population of 67 million. Anti-Muslim hatred has significantly risen in Europe in recent years. Far-right extremism and xenophobia have fueled Islamaphobia in Western countries, where terror attacks by Daesh and al-Qaida as well as a migrant crisis are used as excuses to legitimize those views. There have been intermittent attacks on mosques in France since 2007, when 148 Muslim headstones in a national military cemetery near Arras were smeared with anti-Islamic slurs, and a pig’s head was placed among them. In June 2019, a gunman wounded an imam in a shooting at a mosque in the north-western city of Brest, but police ruled out a terror motive.

Religion can be a powerful and life-altering experience and is important to many in their lives. French authority & the Western World has no idea how important is Prophet Muhammad in Muslim World. Prophet Muhammad (PBUH) is deeply revered by Muslims and any kind of visual depiction is forbidden in Islam. The caricatures in question are seen by them as offensive and Islamophobic because they are perceived to link Islam with terrorism.

The fallout with Muslim World is deepening amid renewed French support for the right to show caricatures of the Prophet Muhammad. With a view to overcome from this crisis, French authority should promote openness and show genuine respect to Islam & Prophet Muhammad by demonstrating empathy and compassion through words and actions. By opening up and learning about Islam & Prophet Muhammad, encouraging and practicing religious tolerance is not only better for the French authority, but for the country’s future as a whole. France should protect the Muslim’s Religious right as guaranteed by the Constitution, treat all Muslims with kindness and take effective measures to alleviate tension and create a climate of respect and dignified living together for Muslims in that Country.

The writer is a Barrister of the Honourable Society of Lincoln’s Inn, Chartered Legal Executive Lawyer of CILEX. He can be contacted at barristermuid@yahoo.co.uk).

The French Crusade: Time to see beyond Charlie Hebdo

Cartoon controversy : Muslims need to realize that we are moving away from real Islam