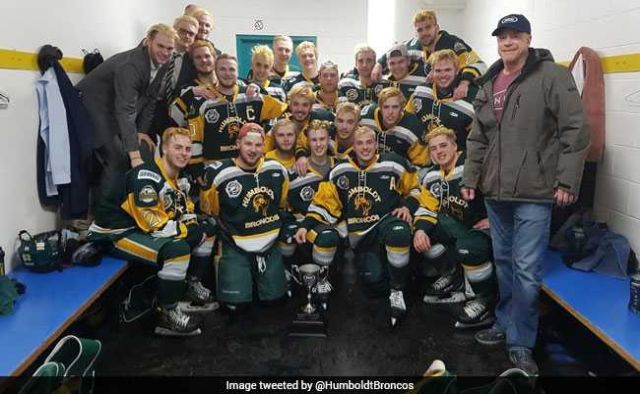 Toronto : A crash between a tractor-trailer and a bus carrying a junior league hockey team has left 14 people dead in western Canada’s Saskatchewan province, police said.

Members of the Humboldt Broncos, who play in the Saskatchewan Junior Hockey League, were headed to the town of Nipawin for a playoff game against the Nipawin Hawks when the crash happened north of Tisdale around 6 p.m. on Friday, the Canadian media reported.

Fourteen others were injured and taken to a hospital. Three were in critical condition, the Royal Canadian Mounted Police said. Twenty-eight people — including the driver — were on the bus at the time of the accident, police said.

In a tweet on Saturday, Prime Minister Justin Trudeau wrote: “I cannot imagine what these parents are going through and my heart goes out to everyone affected by this terrible tragedy, in the Humboldt community and beyond.”

Authorities did not identify the victims and didn’t confirm whether they were players or coaches. Junior league hockey teams are for athletes aged 16 to 20.

“Our thoughts and prayers are extended to the families of our staff and athletes as well as to all who have been impacted by this horrible tragedy,” Broncos president Kevin Garinger said in a statement. “Our Broncos family is in shock as we try to come to grips with our incredible loss.”

“Words can not describe the loss that we feel tonight,” wrote Saskatchewan Premier Scott Moe in a Facebook post. “To the City of Humboldt, the entire Broncos organization, and the families impacted by this tragedy, please know you are in Saskatchewan’s hearts.”

Myles Shumlanski, father of Broncos player Nick Shumlanski, said he got a call from his son and they picked him up, the National Post reported.

“It’s only a quarter-mile from our house. There are casualties and it’s very bad. We were at the scene helping,” Shumlanski said.

“It was a disaster… We had a crane lifting the bus,” he said. Shumlanski said that his son was being flown to Saskatoon after receiving treatment at a hospital in Tisdale.