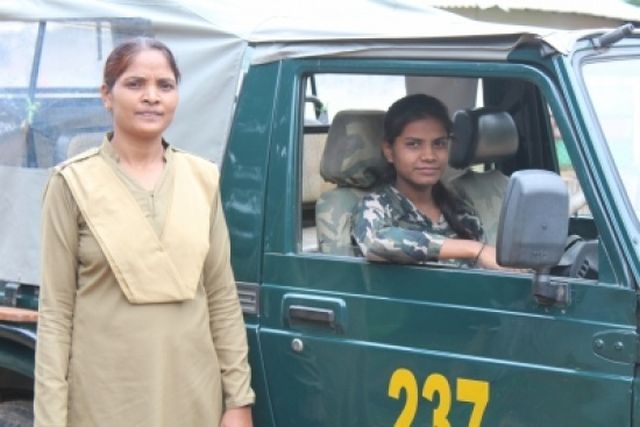 Mukki (Madhya Pradesh) : Mukki zone in the famous Kanha National Park had been known throughout its recorded history to have been ruled by tigresses, rather than tigers. True to this legacy, tribal women of the Mukki zone are breaking conventional chains by taking over men-dominated jobs in the region. These women now drive, guide tourists, guard the forest that traditionally gave them sustenance and are coming forward to shoulder bigger responsibilities.

While the idea to promote women in forest staff, especially as drivers in this largest national park of central India, was conceptualised and executed only in December last year, the way these women excelled in a short span of time has surprised everyone. And encouraged by the success of the experiment, forest authorities are planning to set an example by making Mukki the country’s first women-controlled forest zone while also replicating the idea in other zones.

Judged and under pressure from the day one, it was a difficult journey for Neeta Markam to become the first licensed forest driver here. Her battles began from home, right from convincing her father that she can share family responsibilities and that she wanted to do so by being a driver in Kanha.

People made fun of her when she enrolled in an induction course meant for drivers in this forest reserve but now other girls come to her for advice how they can also do what she did.

“It never said that the course was only for men. My aunt convinced my father and he let me go even as some families taunted, while other girls and boys made fun. Today more girls want to be drivers and they come to me seeking advice. And the boys who made fun of me are now jealous,” Neeta, who belongs to the Gond tribe and hails from Mukki village at the edge of core tiger reserve, told IANS.

Neeta recalled composure of other trainees at driving school watching a girl stepping in. She also recalled how in the beginning of the safari season, people would be skeptic of being driven into a forest by a woman driver, often asking her bluntly if she would be able to manage.

“At times I had to convince them that this forest is my home and I had been trained to drive and show them around,” she recalled.

The Mukki zone – one of the three zones of Kanha Tiger Reserve – presently has two women drivers, six women guides and one forest guard apart from about ten tribal women operating the forest canteen, all hailing from neighbouring villages situated within the forest buffer.

As the tiger reserve is set to open again in October after a three-month hiatus, training is going on for six more guides with local ecology, and a batch of ten women with basic hygiene to work in the forest kitchen.

While Madhya Pradesh has highest number of the displaced tribal families, the example set by the forest authorities by extending support to rather marginalised tribes is now raising hopes and aspiration among villagers who previously abstained from allowing women to do jobs they thought were meant for men.

“In its recorded history, Mukki zone, unlike Khatiya and Kanha gate, had always been ruled by tigresses, rather than tigers. Staying true to its nature and name, we wanted to take the tradition ahead and turn it into a place where women guards go on night patrolling, drive vehicles and also show people around. And when you come back, you stop by an all-women-led cafeteria,” S.K Khare, assistant director at Kanha Tiger Reserve, told this visiting correspondent.

He added that at present, Kanha is one of the few national parks where women forest guards are stationed in the core forest posts and licensed women drivers take tourists inside the forests.

Madhuri Thakur, who cleared her intermediate examination in 2017 at the age of 20 years, is another licensed driver. Inspired by her father, a retired forest guard, Madhuri said while the forest officials and her trainers had always been patient, her colleagues also encourage all women to believe in themselves.

“Once Neeta brushed her jeep and started crying; then other drivers came and started boosting her confidence and making her comfortable. They jokingly told her that this is merely a small incident and they had almost killed a person in their initial phase,” Madhuri recalled.

As the tribal culture marries girls young, the emerging trend of empowerment pitches these women to change traditions.

“I don’t want to marry now, and even if my family forces me to do so, I would prefer to be married somewhere near my village because I don’t want to quit this job that I love. Why should women make all the sacrifices,” said Madhuri, who aspires to own her own vehicle some day.

Forest guard Lakshmi Maravi, who also hails from Gond community and is the sole breadwinner of her family of three siblings and a mother, said that forests had given her a sense of belonging and an identity.

“During my training, I was sceptical of my abilities but now I go on night trails, shoo away the poachers and keep the forest safe. Now I feel I was made to do this,” Maravi said.

Suhkati Dhurvey, a forest guide, told the visiting IANS correspondent that merely six guides is a good start, but it isn’t enough. She, along with others, earn about Rs 10,000 per month, but since the park is closed for three moths, this hampers their income. 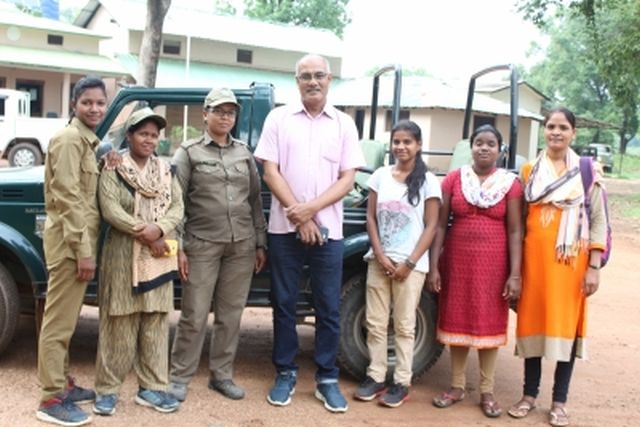 “There should be more women employed in this sector; it means a lot for tribal ladies and gives them hope that they are more than mere labourers,” said Dhurve.

She said that spotting birds is far more fun than tigers and that is something she likes to encourage tourists to do as well to show that there is more to a tiger reserve than tigers alone.

Asserting that employing women was not just another social experiment of “women empowerment”, forester Khare said it is rather part of a larger cause.

He said while there was a mistrust and misunderstanding among the tribes and the forest department – as tribals largely depend on the forests and the department has the responsibility of conservation – only steps like empowerment can make both go along.

“Almost every woman who works here has a some sort of crisis back home. These jobs have given them hope,” he said.

Stating that while earlier women were not preferred for the job of a guide or a guard, it was observed that they work harder and with more passion that men.

“It is important that we create better work culture and environment. After we employed women, we saw the staff had started acting more responsibly,” Khare said, adding that the aim is to make Mukki zone an “all-women-operated area”.

(The weekly feature series is part of a positive-journalism project of IANS and the Frank Islam Foundation. Kushagra Dixit can be contacted at kushagra.d@ians.in )