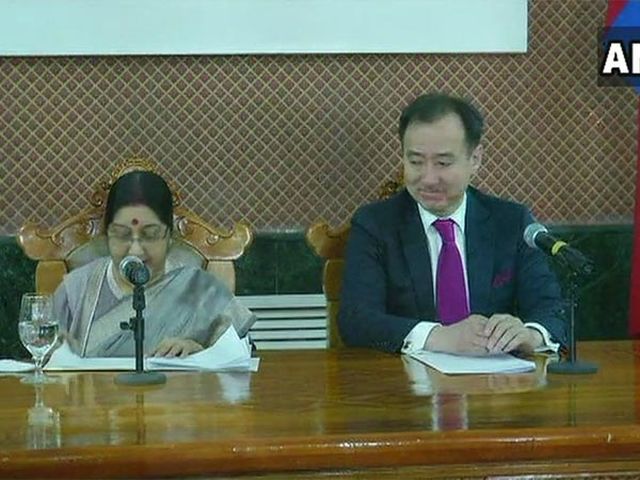 Ulaanbaatar : External Affairs Minister Sushma Swaraj on Wednesday discussed terrorism with her Mongolian counterpart Damdin Tsogtbaatar and the two agreed to collaborate to confront those who design and support terror outfits.

Sushma Swaraj, who arrived in the Mongolian capital here on Tuesday after wrapping up her China visit, also called upon the country’s business community to seize economic opportunities from India’s growth.

She is here to co-chair the sixth round of the India-Mongolia Joint Consultative Committee (IMJCC), focusing on a range of issues including economic, energy, political, strategic, educational and cultural ties.

She is the first Indian Foreign Minister to visit Mongolia in 42 years.

In 2015, Narendra Modi was the first Indian Prime Minister to visit this landlocked Asian country. It had ruffled China’s feathers.

Addressing a press conference here after holding talks with Tsogtbaatar, Sushma Swaraj said: “We discussed global challenges affecting humanity, particularly terrorism, and agreed to collaborate bilaterally in the international arena to root out this evil.

She said India sees Mongolia as a factor of stability in East Asia, adding that the country’s social and economic development is the key to peace and prosperity in the region.

India is currently helping Mongolia build its first oil refinery with a $1 billion line of credit, to reduce its dependence of neighbouring nations.

Sushma Swaraj said that she had reviewed the oil refinery project and other ongoing projects.

“India has emerged as the fastest growing economy in the world. With its rich natural resources and strong aspiration for development, Mongolia can be an important partner in India’s growth story,” she said.

She said both the nations have identified new areas of cooperation that include IT, infrastructure, energy and services.

Both the countries agreed to remove institutional and logistical obstructions to boost trade and tourism.

Sushma Swaraj passes away , condolences pour in from national and foreign leaders