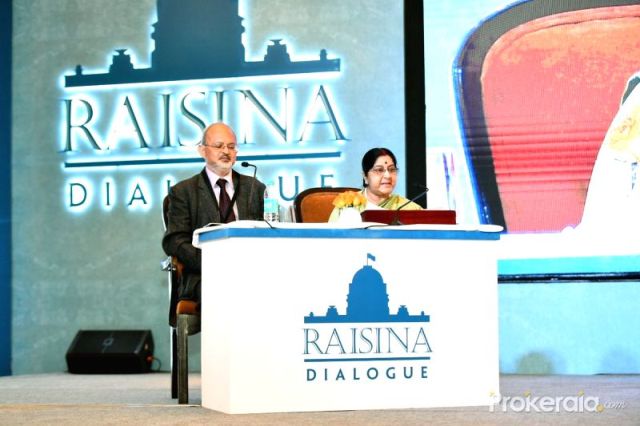 “There was a time when India would talk about terrorism, and it would be treated as a law and order issue on many global platforms,” Sushma Swaraj said while addressing 2019’s Raisina Dialogue, India’s flagship annual geopolitical and geostrategic conference, organised by the External Affairs Ministry in partnership with the Observer Research Foundation (ORF) think tank.

“Today, no country, big or small, is immune from this existential threat, particularly terrorism, actively supported and sponsored by states,” she said.

“In this digital age, the challenge is even greater, with a greater vulnerability to radicalisation.”

Sushma Swaraj recalled that in 1996 India proposed a draft Comprehensive Convention on International Terrorism (CCIT) but lamented it has remained just a draft till today “because we cannot agree on a common definition”.

“Ensuring zero-tolerance towards terrorism, and those who use it as an instrument of convenience, is the need of the hour,” she said.

The second threat, she said, is the threat of proliferation of WMDs.

Thirdly, she said, developing and under-developed nations are the worst victims of climate change, with neither the capacity nor the resources to meet the crisis.

“We have risen to meet the challenge. India, in partnership with France, launched the International Solar Alliance (ISA) with the participation of 120 countries,” Sushma Swaraj said.

In her address, she also outlined the five elements of India’s global engagement over the last four-and-a-half years.

Firstly, Sushma Swaraj said, India has rebuilt its bridges with its immediate and extended neighbours.

“In particular, Prime Minister’s strategic vision of SAGAR has spurred a qualitative transformation in India’s engagement with the Indian Ocean Region in recent years,” she said.

“Our revitalised Act East and Think West paradigms have further broadened the reach of our strategic and economic neighbourhood.”

Secondly, Sushma Swaraj said, New Delhi is shaping its relationships in a manner that synchronises with India’s economic priorities.

“With this ‘diplomacy for development’ approach, each global interaction is now focussed on building partnerships to promote our transformative flagship programmes such as Make in India, Smart Cities, Digital India, AMRUT and Namami Gange,” she stated.

“Third, we are focussed on making India a human resource power to be reckoned with by connecting our talented youth to global opportunities.

“This is being achieved through Skill India partnerships with several countries, as well as under the aegis of the GIAN programme and various private sector partnerships under Digital India.”

Fourthly, the External Affairs Minister said, India is building sustainable development partnerships stretching from the Indian Ocean and Pacific Islands to the Caribbean, and from the continent of Africa to the Americas.

“These initiatives have expanded; both in geographical reach and sectoral coverage, and now include Lines of Credit and grants, technical consultancy, educational scholarships and a range of capacity-building programmes,” she said.

“Whether it is by founding the International Solar Alliance, which will benefit our energy security and also combat climate change; or our active role in humanitarian and disaster relief operations in our neighbourhood; or our membership of key institutions of global governance – India is a proactive and constructive contributor to promoting and upholding global peace and security,” she said.

This year’s Raisina Dialogue, which is in its fourth edition, is being attended by over 600 delegates from 92 countries, including influential political leaders, strategic thinkers, policy practitioners, technology innovators, business representatives and academics.