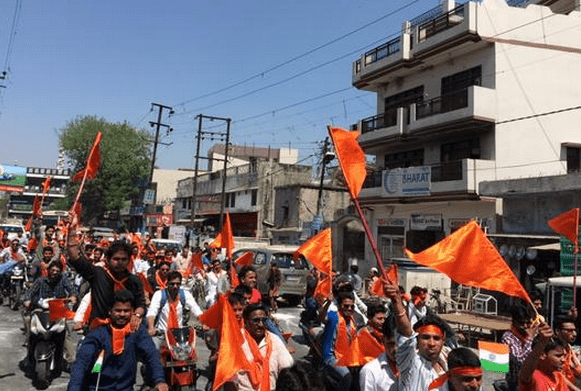 In practice, India has been neither secular nor socialist. It has always functioned as an upper-caste Hindu state.  Arundhati Roy

The Constitution of India is based on the premise of secularism and unbiased principles. But the question is: Are these secular principles practiced in true sense of the term in our country at present? The obvious answer that echoes from the events and episodes have been happening around us from the last many years is: No with the capital ‘N’. The atmosphere that is hovering here and there does not sound secular in India these days.

India was once known for its communal harmony, tolerant social milieu, peace and prosperity. It has always been characterized by amicable co-existence, brotherhood, and religious tolerance. It has always supported secular values in the face of striking, ethnic, linguistic and religious diversity. But all these positive things and social pleasantries are showing a downward slope and regression from the last couple of years. Communal harmony, secularism and secure social atmosphere no longer characterize India these days. Casteism, bigotry, religious intolerance, and communal disharmony are the essential epithets that characterize our country at present. The Ganga-Jammuni Tahzeeb is no longer in its good health because of religious and communal intolerance.  India of the present times does not sound safe and secure for the religious minorities. A country loses its claim of secular nature when religious minorities are lynched in the broad day light. We hear about the lynching of Muslims and Christians on regular basis. Muslims are lynched for eating beef by cow vigilantes. Sometimes they are lynched for the so-called Love-Jihad. Christians are lynched for the false charges of converting people into Christianity. The first Christian who became the victim of Hindu fundamentalism was Graham Staines. Staines was an Australian Christian missionary. He was working in Odisha for poor people. He was caring for the people who had leprosy. In 2003, he along with his two sons was burnt alive in  car. Those who did this heinous act alleged that he had forcibly converted many Hindus into Christian faith. The Wadhwa Commission later found that there was no evidence of forced conversions.

Christians like Muslims are lynched on false charges and suspicions.  Recently, a- 14 year- old Christian boy, Samaru Madakami, was lynched mercilessly by a group of religious fanatics in Odisha. Dalits are also targeted on regular basis. These heinous acts committed by the Hindu fanatics tell us that India is no longer a secular country.  Had the country been the lover of the secular principles in the true sense of the term, there would have been the strict rules and laws for the perpetrators of these callous acts. Muslims and Christians are targeted for not chanting “Bharat Mata Ki Jai”.  Sometimes they are defined as anti-nationals. This is done to make them scapegoats.

The atrocities against the religious minorities do not bode well for the democratic and secular fabric of our country. We should maintain the secular structure of our country. This can be done by safeguarding the religious minorities. We should shun violence against the minorities. Every religion is sacred and pious. No religion advocates violence. People who use violence actually defame their religion. Where the people of every faith and religion are treated equally, where minorities feel safe and secure, there is secularism. Religious pluralism is the essential identity of any secular country. So, let’s be secular in the true sense of the term.

Postscript: The violence of inclusion and the violence of exclusion are precursors of a convulsion that could alter the foundations of India and rearrange its meaning and its place in the world. Arundhati Roy

Bilal Ahmad Dar is a Research Scholar at the Department of English, AMU. He can be mailed at: bilalbismil89@gmail.com

Secularism is not a choice, but a Duty