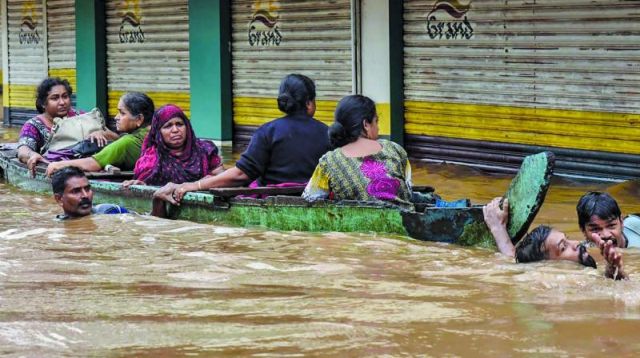 New Delhi : Keralas once-in-a-lifetime rainfall was 2,378 mm over 88 days, four times more than normal — but 30 per cent less and spread over 61 days more than the deluge of 1924, the most intense flood in the states recorded history, submerging as it did almost the entire coastline.

So why was the flood of 2018 as devastating as the 3,368 mm rainfall that Kerala received 94 years ago? That’s because Kerala has reduced its capacity to deal with such extreme floods by allowing illegal stone quarrying, cutting down forests and grasslands, changing drainage patterns and sand mining on river beds, said experts.

“Rampant stone quarrying and digging of pits is the reason behind the landslides and landslips, which worsened the situation in the Kerala floods,” Madhav Gadgil, ecologist and founder of the Centre for Ecological Sciences at the Indian Institute of Science, Bengaluru, told IndiaSpend. “These quarries cause deforestation and block the natural streams, which help in reducing the intensity of the floods.”

Most of the 373 casualties in Kerala were caused by landslides in the northern districts of Malappuram and Wayanad, and the central district of Idukki.

Gadgil is the lead author of a 2011 government-commissioned study written by the Western Ghats Ecology Expert Panel (WGEEP) — commonly called the Gadgil committee report — which he headed. The report recommended that development be restricted in the Western Ghats, which sprawls across six states, including Kerala.

Most of the regions overwhelmed by the recent floods were classified as “ecologically sensitive zones” — where there should be limited or no construction or deforestation — by the Gadgil committee.

In 2011, the Centre and the Western-Ghats states, including Kerala, refused to accept the Gadgil committee report.

The rain and tropical forests of the Ghats are one of the world’s 10 “biodiversity hotspots”, home to the most diverse range of life in the subcontinent: 7,402 species of flowering plants, 1,814 species of non-flowering plants, 139 mammal species, 508 bird species, 179 amphibian species, 6,000 insects species and 290 freshwater fish species. The Ghats are also a source of about 20 rivers and tributaries watering the Indian peninsula, and its forests and grasslands act as a super sponge, soaking up excess rain.

The committee’s recommendations included restrictions on mining and quarrying, use of land for non-forest purposes and no construction of high-rises.

“A study in the southern region, comprising the states of Karnataka, Kerala and Tamil Nadu, showed that between 1920-1990 about 40 per cent of the original forest cover was lost or converted to another form of land use,” said the Gadgil committee report.

“Change in land use of forests exposes the region to such [Kerala-like] calamities,” said Gadgil, whose point has been that the scale of the disaster could have been reduced.

Like other experts, V.S. Vijayan, a member of the Gadgil committee and former chairman of Kerala State Biodiversity Board, told IndiaSpend that cutting trees in the catchment areas of dams, illegal construction and farming on slopes exceeding 30 degrees were among the main reasons for flood devastation.

“Many of these activities end up loosening the soil, making it susceptible to landslides,” said Vijayan. “We had recommended against all of these practices in the Gadgil committee report, but no one listened.”

One of the main reasons for the rejection of the Gadgil committee report was the government’s confusion between the definition of ecologically sensitive zones and ecologically fragile areas, according to Vijayan.

Kerala has a 15-year-old law called the Ecologically Fragile Lands Act, which says people can be evicted from protected areas, such as wildlife sanctuaries and national parks. The government thought that the ecologically sensitive zones were essentially the same, “which was not the case”, said Vijayan.

“We clearly divided the entire Ghats into three zones based on their ecology and needs of protection,” said VIjayan. “It never meant that humans were to be evicted from sensitive areas.”

Extreme rainfall events cannot be stopped, but the impact of floods can be reduced if forests and natural landscapes are used as shields, he said.

In the monsoon of 2018, the “pressure gradient” — which determines pressure changes and, in turn, rainfall — between land and the Arabian sea was “very strong”, said Pai, causing heavy rain. “A low pressure developed in the Bay of Bengal and moving inland contributed to the heavy rain by making the winds stronger.”

India could see a six-fold increase in population exposed to the risk of severe floods by 2040 — to 25 million people from 3.7 million facing this risk between 1971 and 2004 – according to a 2018 study published in Science Advances, a peer-reviewed journal.

(In arrangement with IndiaSpend.org, a data-driven, non-profit, public interest journalism platform, with whom Bhasker Tripathi is principal correspondent. The views expressed are those of IndiaSpend. Feedback at respond@indiaspend.org)

Kerala’s devastation: Why can’t we learn from others?