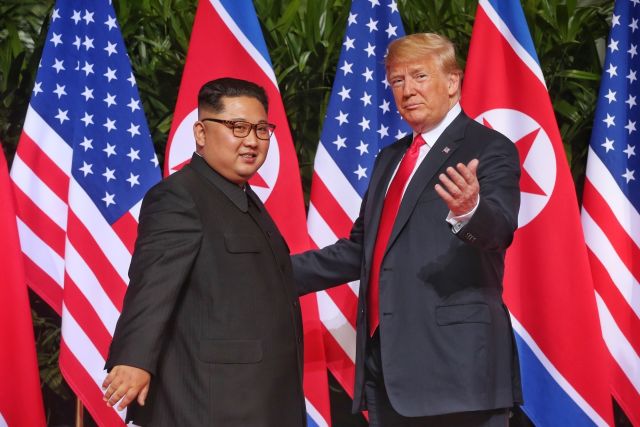 Singapore : US President Donald Trump and North Korean leader Kim Jong-un signed a “comprehensive” document at the end of their historic summit here on Tuesday, vowing to forge a new partnership and reverse decades of American policy toward the rogue regime.

The content of the agreement was not immediately clear although both sides touted it as a significant achievement, reports The New Straits Times.

“Today we had a very historic meeting, overcoming our past history and embarking on a new beginning… The world will see a major change,” Kim said before leaving for the St. Regis hotel after the summit.

Trump said he had invited Kim to the White House.

Kim and Trump became the first leaders of their countries to ever come face to face. Trump said the US relationship with North Korea will be different from the past.

“We’re both going to do something, and we’ve developed a very special bond… We’re going to take care of a very big and dangerous problem for the rest of the world.

“It worked out far better for both of us than anybody could have expected,” he added.

When asked about denuclearisation, Trump said: “We are starting the process very quickly.”

He said the two leaders learned a lot about each other since they shared a historic handshake for the first time earlier this morning.

During the signing ceremony, the two leaders sat side by side at an expansive wooden table decorated with white flowers and were flanked on either side by American and North Korean flags, The new Straits Times reported.

The signing came after a one on one meeting between Kim and Trump which was followed by an expanded bilateral meeting with their aides and a working lunch.

They even went for a stroll.

Before the signing, Kim said the summit was a “great prelude to peace”.

“Of course there will be difficulties along the way, but as of today, a day that a good start has been made, I am determined to start a grand undertaking together,” he added.

They began their summit in a carefully choreographed encounter at 9 a.m. The two leaders then shared a 12-second handshake against a backdrop of American and North Korean flags.

They reached Singapore on Sunday followed by their individual meetings with Prime Minister Lee Hsien Loong.

Trump and Kim will depart Singapore later on Tuesday.

The summit, which was almost scrapped by a mercurial Trump last month, comes after a flurry of diplomatic activities and barrage of invective and insults traded between the US President and an equally aggressive Kim.

It also marks a diplomatic landmark between the two countries with a long history of tense ties.

The 1950-53 Korean War ended without an official peace treaty. Previous US Presidents have made several attempts to get Pyongyang to give up its nuclear weapons, without success.

Two major diplomatic efforts – an agreement in 1994 and the six-party talks in the 2000s – were ultimately abandoned, with both sides either failing to agree or accusing the other of not abiding by the terms of the agreements.