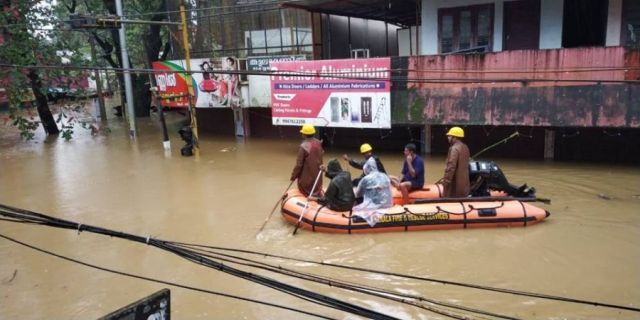 Kerala: In a shameful incident it has come to fore that many upper caste Hindus rejected help from Christians during Kerala floods.

According to CNN, fisherman Marion George (47) went to a house in Kollam city where 17 members of a family were trapped. When he told them that he had come to help, he was asked if he was a Christian.

When he replied that he was Christian, the family refused to get into his boat and asked him to leave.

The family were Brahmins, the highest Hindu caste, and would not go near George, despite the precarious condition they were in.

George says five hours later he went to the same neighbourhood again and saw the same family calling for help. He docked his boat close to their home but was again told that the family members will only board the boat if he doesn’t touch them, CNN reported.

“This is how they behave normally. We thought they would have changed in this situation,” says George.

George says he rescued around 150 people in two days before his boat broke down. Several other fishermen have also said that they were insulted by people they were trying to rescue.

According to the state government, nearly 3,000 fishermen came forward to join the relief efforts.

People have been reluctant to leave their homes out of fear that their belongings will be robbed.

Arun Michael says when he saw the news of flash floods wreaking havoc in the state on TV, he loaded his 32-foot boat onto a truck lent to him by the police and went to Pathanamthitta district.

He evacuated more than 1,500 people over a period of three days navigating his boat through strong currents and rising water. On the last day, he rescued 600 people.

But he was taken aback when some of the victims eyed him suspiciously and showered him with insults.

“They abused me for trying to convince them to evacuate. Some even made me carry their pets to the boat before climbing in themselves,” says Arun.

“In some instances, they flatly refused to be rescued. They wanted us to give them food and leave.”

But many have praised the bravery and ingenuity of Michael and his fellow fishermen.

In one daring rescue, Michael and his friends found a house filled with water and when they entered it after breaking a door, they found a mentally-ill woman in one of the rooms.

They stacked three tables on top of each other to carry her out, themselves wading through water up to their chins. They had to repeatedly go underwater to stabilise the tables.

The government has announced a compensation of Rs 3,000 for each volunteer fisherman plus the cost of repairing damaged boats.

Many fishermen are waiting for the authorities to deliver the money so they can repair their boats and go fishing again but Michael isn’t one of them.

“My boat is damaged but I won’t take money from the government,” he says. “I didn’t do it for money or other benefits.”