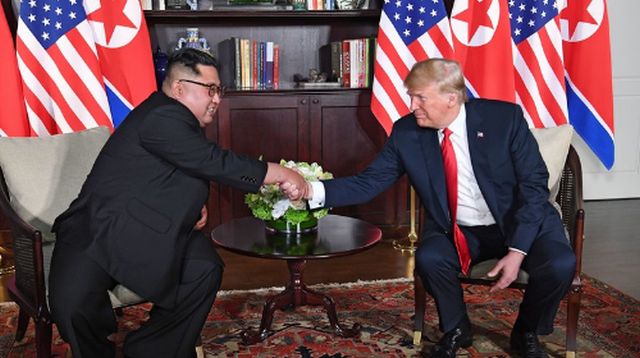 Seoul : The US and North Korea held general-level talks for the first time in more than nine years on Sunday to discuss the details of an agreement to repatriate the remains of American troops killed during the 1950-53 Korean War.

The meeting had originally been scheduled to take place on July 12, but the North called it off at the last minute, citing a lack of preparations, reports Yonhap News Agency.

The North then suggested holding general-level talks with the US-led U.N. Command (UNC) on Sunday, and Washington agreed.

Sunday’s talks began at around 10 a.m. at the inter-Korean border village of Panmunjom.

Maj. Gen. Michael Minihan, chief of staff for the UNC, led the US side and the North’s delegation included a two-star general, sources said.

It was unclear whether the talks would conclude on Sunday or be extended for another day.

Recovering and repatriating the remains of the American troops was one of the agreements that US President Donald Trump and North Korean leader Kim Jong-un reached during their historic June 12 summit in Singapore.

Sunday’s talks were expected to focus on such details as when and how the remains should be transferred.

But the North could also demand something in exchange for the return or raise other issues related to the armistice that ended fighting in the Korean War.

The North’s proposal of talks with the UNC, even though the UNC is led by the US, was seen as an attempt to use the meeting not only to discuss the repatriation of war remains but also other issues, such as a proposal to jointly declare an end to the Korean War.

But a South Korean government source said the North and the US agreed to only discuss the issue of repatriating the remains at Sunday’s talks.

Sunday’s meeting was the first between the UNC and the North’s military in nine years and four months. General-grade talks between the two sides have been held 16 times since 1998 and the last meeting took place in March 2009.