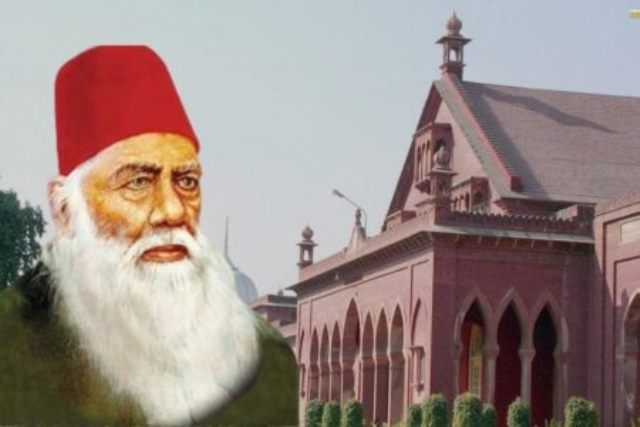 Syed Ahmad Taqvi bin Syed Muhammad Muttaqi, also known as Sir Syed Ahmad Khan, who led the foundation of the Mohammadan Anglo Oriental College (Aligarh Muslim University) in 1875 at Aligarh, was a versatile personality, with many shades. His legacy as Aligarh Muslim University today with us, caters to the variety of aspirations of millions of students. Sir Syed is known for his profound contribution in socio-economic fields and an influential figure in Indian political thought. He was born in an Muslim aristocratic family, which was close to the Mughal royal court. After completing his education, he joined the judicial service during colonial era. Since then, he actively participated in the socio-political affairs.

Sir Syed had worked tremendously for the amelioration of the Muslim community while emphasizing upon the need of education and modernity. He is revered for his unparalleled reform work, which he felt was imperative for the upliftment of the Muslim community. In the aftermath of 1857 revolt, when Britishers developed animosity with the Muslims, Sir Syed strived to gain back the confidence of Britishers. For that, he did his best in improving the image of the Muslim community and made multiple attempts in convincing Britishers, that Muslims are loyal and trustworthy. In this context, he published a book called “Loyal Muhammadens of India’ to strengthen the position of Muslims in the eyes of British.

He strongly believed that the progress of a community depends upon the education. Thus, he encouraged education among Muslims. He emphasized both on formal education and character building. And repeatedly puts only higher education will raise people to a high level. His journal named “Tahzib-ul-haq” (manners and morals), which gained wide popularity among the Muslim audience in British era.

David lelyveld discussed Sayyid’s naicari approach in book “Cambridge companion to Sir Syed Ahmad Khan”, for modern sciences which was to read the Qur’an through the lens of what he considered naicar and ‘Modern Sciences’. The Qur’an can be shown to be entirely consistent with the ‘law of nature’ because it’s God’s eternal, unbreakable promise. This approach of Sayyid is what Lelyveld pointed out, as, ‘his appeal is a rearguard action to revive and advance rationalist strain in the Islamic intellectual tradition’. Syed interpreted Islam as a rationalist force compatible with the western ideas through his writings and persuaded Muslims to get higher education along with modern learning and not to reject it. Through his works, he tried to portray, how science is compatible with the teachings of Quran.

His vision to find an institution influence his contemporaries and gathered support from people like ‘Maulana Shibli Numani’ and Khwaja Hussain Hali and many more who shared the same vision that Sayyid had to uplift downtrodden Muslims and improve their lives by offering education at par with the modern society through western learning. Syed was strong proponent of western education to be taught to Muslims. He in his letter to Maulvi Tasadduq Husain, wrote: “The Muslims have nothing to fear from the adoption of the new
education if they simultaneously hold steadfast to their faith, because
Islam is not irrational superstition; it is a rational religion which can
march hand in hand with the growth of human knowledge. Any fear
to the contrary betrays lack of faith in the truth of Islam”.

His idea of QAUM [nation] comprises of both Hindus and Muslims, as both are inhabitants of India. For him, India is a homeland of both. He called them both as beautiful and lustrous eyes of one bride. He has rejected the linguistic divide and called Urdu language of both. He emphasized upon the unity of the two faiths. He suggested both Hindus and Muslims to remain distance from Indian National Congress, as he was not in favour of the organisation, opposing the nationalist goals of INC.

As a British employee Sayyid Ahmad also conducted a survey named “ASAR” of monuments of Delhi included all Hindu, Jain and Sikh architecture alongside Islamic heritage. More specifically it signals the beginnings of Sayyid’s lifelong commitment to create a seamless historical continuum between a vibrant Islamic heritage and modernization facilitated by European intervention. He recuperated value from Delhi’s largely Islamic built environment by detailing its architectural successes and technological achievements for posterity argues one scholar, named Rajgopalan.

Syed’s modernist approach invited criticism from section of Ulemas and even fatwas were issued against him. He has been accused for his disloyalty towards Islam, for promoting western education. His approach due to exclusion of poor Muslims from the plan of education, faced invalidations. However, setting aside the critical analysis, his vision of educating and reforming the Muslim community are hailed as the right steps taken for the upliftment of Muslims. His ideas inculcated in his movement of promoting education, continue to benefit people even today, keeping him alive among all of us. Concluding it with Jawahar Lal Nehru’s statement, who recognised Sayyid as someone who “wanted to reconcile modern scientific thought with religion by rationalistic interpretations and not by attacking basic belief and that he was in no way communally separatist”.

Book review: AMU’s role in making Muslim mindset and its impact on India’s socio-cultural set up

Sir Syed – A quest for dignity