New Delhi : While Amitabh Bachchan the  ‘Mahanayak of Century’  and his family  felt proud to pose for a  selfie with Israeli Prime Minister Benjamin Netanyahu –  the three super  Khans  of Bollywood  Amir Khan , Salman Khan and Shahrukh Khan avoided the event organised for Netanyahu. 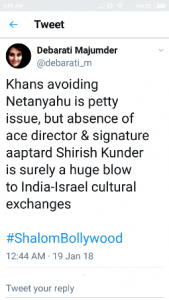 Some section of media have got a chance to criticize this brave and graceful gesture  of   Khans and presenting their approach in such a way as if the they refused to meet Israeli PM because Netanyahu is a Jew.

On the other hand some Bhakts are also terming the absence of Khans from Shalom Bollywood event as an-anti national act.

The matter of fact is  ‘the super star Khans of Bollywood didn’t like meeting a person who an accused of war crimes, a bloody Zionist and mass killer of innocent Palestinian kids women and elders in cold-blood.

All three Khans are being applauded widely on social media for their humanitarian gesture and for playing the role of Real Heros’ by not attending  a function which was to boost Indo-Israeli cultural ties.

Another Bollywood actor Ejaz Khan  made a video criticising Bachchan and Karan Johar for having a selfie with Israeli PM Netanyahu.

Khans are not exceptional in this case  most of the renowned personalities of Bollywood  were absent from the function held in Mumbai.