New Delhi:  At a joint online news conference, prominent political leaders, activists and rights defenders have strongly condemned ‘repressive and autocratic’ measures adopted by Uttar Pradesh Chief Minister Yogi Adityanath government against the anti- CAA protesters. They also urged opposition parties to raise their voice against the ‘blatant rights violation’ and ‘lawlessness’ in the largest populated state of the country.

In his opening remarks, Adv. A. Mohamed Yusuff, Secretary, National Confederation of Human Rights Organisations (NCHRO), said  the  human rights situation and  the happenings  in  UP should be a matter of  grave concern to those who believe in the rule of  law  and  in democratic values.

He alleged that the BJP led central and state governments resorted to ‘unlawful and repressive’ means   to crush the democratic and peaceful agitation against the controversial and discriminatory amended citizenship law that erupted across the country.

While referring to the illegal arrest of Dr Kafeel Khan and Sharjeel Usmani, former MP, Maulana Obaidullah Khan Azmi said the opposition has become mute spectators that emboldened the Yogi government which has been using strong-arm tactics to crush the dissent.

Maulana Azmi said Samajwadi party and BSP have been silent on the atrocities perpetuated by the Yogi Police and reign of terror unleashed by the state government to cow down the voice of dissent in the state.

Sharing his views, Former BSP leader, Advocate Sharfuddin Ahmad also slammed the opposition and termed it weak, and confused. The opportunistic and stereotype approach of politicians has made the matters worse in the state.

Ahmad,  who is now  Vice President of Social Democratic Party of India (SDPI), alleged that  ‘Yogi himself  said  personifies a  criminal and communal character  and  proved  himself as an inefficient and inexperienced leader as UP has been slipped into ‘ goondaraj’.

“Since usurping CM’s chair, skipping democratic process of election even carrying with a long trail of heinous crimes as commander of his radical and violent outfit Yuva Hindu Vahini, Yogi has brazenly demonstrated his criminal mindset and communal-casteiest approach in running the affairs of the government,” he said.

SDPI leader said people did not forget his rhetoric like “Badla lenge”, “thonk do” etc which is unbecoming of a chief minister.

He also rued that the lower judiciary has almost become subservient to the government of the day because of this; people are losing faith in the instrument of justice system. 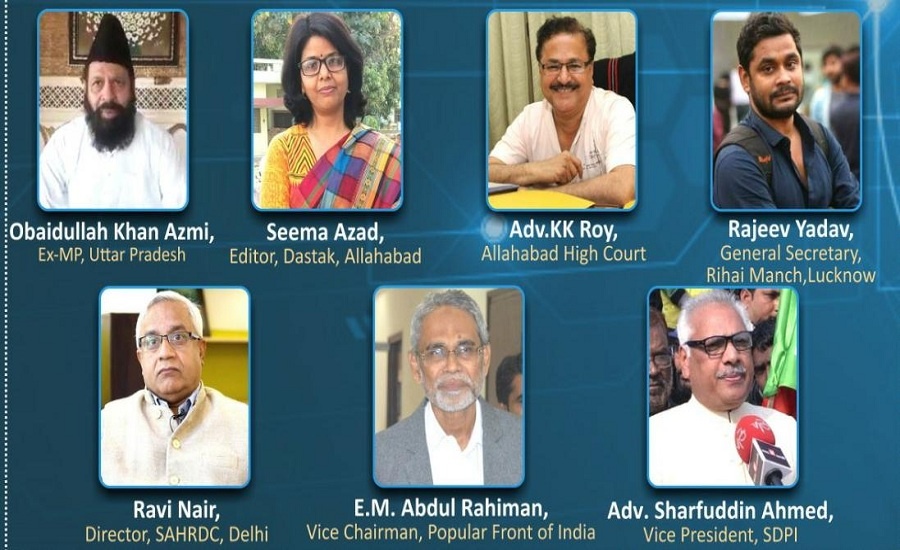 They issued a joint statement that read: “The BJP and its state governments violated the very ethos the nation has been founded on. Uttar Pradesh Chief Minister Yogi Adityanath communalised the issue and gave the police and right-wing goons free rein and impunity to shoot, destroy properties and torture people for exercising their democratic rights to dissent and protest peacefully.

Currently the lockdown situation is being misused to take revenge against all opponents in the state.  Human Rights activists, political leaders, students and innocent people are being intimidated and harassed by the police on a daily basis. Draconian provisions are being slapped on them and implicating them in fabricated cases. Extrajudicial killings, unlawful arrests and harassment of innocents are alarmingly on the rise.

The UP Police is carrying out a witch-hunt against activists by defaming them as rioters. The genuine people’s voices are labeled as anti-nationals to legitimize brutal oppression of the police. Recently, Aligarh Muslim University (AMU) student-activist Sharjeel Usmani who was vocal against the government’s oppression was arrested on fabricated charges. Mufti Muhammed Shahzad, UP State adhoc Committee member of Popular Front of India was arrested because he had filed a Public Interest Litigation in the high court requesting an impartial judicial probe headed by the sitting or retired, Supreme Court or High Court judge on the UP Police the violence during the demonstrations against the CAA / NRC in Uttar Pradesh on Dec. 19, 2019 onwards. The arrest of Dr. Kafeel Khan was the clear evidence of vendetta politics where the BJP government is using all means available to destroy his life. Many such activists are incarcerated on fake charges and being harassed continuously. Draconian laws like Unlawful Activities (Prevention) Act (UAPA) and National Security Act (NSA) are being used against these activists.

The irony is that, the provisions of the Uttar Pradesh Gangsters and Anti-Social Activities (Prevention) Act, 1986 (In short, Gangsters Act) and UP Control of Goondas Act, 1970 (In short, Goondas Act) are invoked against the activists who had democratically fought for their right to live in the country they were born, while the literal goondas, gangsters and anti-social elements are roaming free across the state with impunity. Apart from this, again and again the false cases were slapped against the activists, who were already incarcerated in jail and those who were released on bail.

The UP administration has now started a new draconian action of attaching people’s properties in the guise of getting recompense for the alleged vandalism during the anti-CAA protests. Anyone can be booked by alleging their involvement in rioting cases and their property can be attached. This is a new strategy to not only destroy the individuals by incarcerating them; but also permanently damaging their future by taking away their properties.

The state government, through such anti-democratic and violent measures seeks to eliminate all forms of opposition in the state.”

NCHRO , which has organized the press conference on the law and order situation in UP, has  vehemently demanded that a Supreme Court monitored judicial enquiry be held in the recent extra- judicial execution of some criminals in Kanpur and other places in UP.