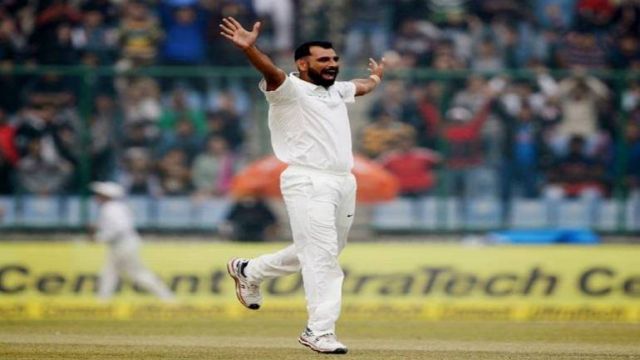 New Delhi : Beleaguered India pacer Mohammed Shami on Thursday got a major reprieve from the BCCI anti-corruption unit in the allegations of match-fixing after which the Supreme Court-appointed Committee of Administrators (CoA) recommended he be included in the list of centrally contracted players.

Shami was excluded from the list of central contracts after his wife Hasin Jahan accused him of domestic violence and extra-marital affairs a day ahead of the announcement of the contarcts.

The Bengal pacer was probed by the Board of Control for Cricket in India’s anti-corruption officials after allegations were made by his estranged wife that he had taken money from Pakistani contacts.

But at the end of the investigations by the head of the BCCI anti-corruption unit Neeraj Kumar, the paceman was found not guilty and thus the CoA has recommended that he should be placed in Grade B of the contract lists.

“The Supreme Court of India-appointed Committee of Administrators (CoA) had requested Neeraj Kumar, former Police Commissioner of Delhi and head of BCCI anti-corruption unit, to investigate the allegations against Mohd Shami in so far as they pertain to the provisions of the BCCI anti-corruption code,” the BCCI said in a statement.

“Neeraj Kumar has submitted his confidential report to the CoA. Based on the conclusions in the said report, the CoA is of the view that no further actions/proceedings under the BCCI anti-corruption code are warranted in the matter.

“For this reason, the BCCI shall proceed with offering a Grade ‘B’ annual retainership contract to Mohd Shami,” the statement added.

Earlier, four officials of the Indian cricket board’s anti-corruption wing had spoken to Jahan over allegations that the player was involved in match-fixing.

However, according to sources, Jahan had handed them some documents supporting her allegation that Shami met a woman in Dubai who was supposed to give him money sent by another person from Britain. The officials also spoke to Jahan’s father and her two daughters.

She has also released an alleged recording of her telephonic conversation with the pacer during which Shami rejected the accusations of adultery and claimed that he met a woman named Alisba in Dubai who was supposed to give him money sent by a certain Mohammed Bhai from Britain.

Azharuddin advice for free as son gets into Goa team: Official