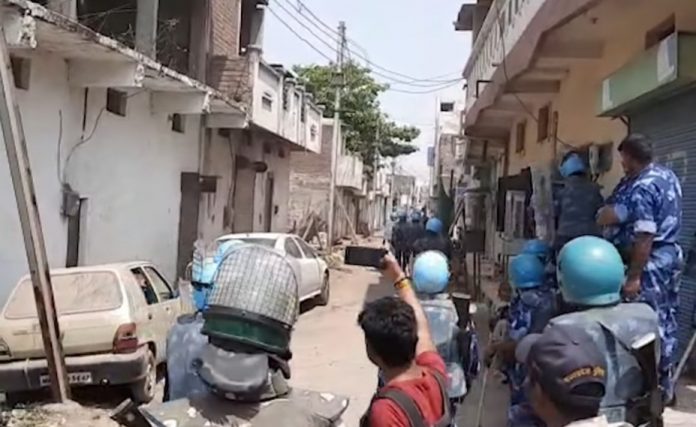 Bhopal/New Delhi: The Madhya Pradesh police has so far arrested 104 people in connection with the communal violence, which broke out at Khargone on April 10 during Ram Navami processions. They are all Muslims. But the police action failed to surprise many as it was already indicated by the political leadership of the state, which had already put the blame for the mayhem entirely on the minority community — arguing that the riots erupted after the rally was attacked.

Of the 26 FIRs (first information reports) registered in the past two days, one only has been lodged by a Muslim complainant.

Tilak Singh, deputy inspector general of police (DIG), Indore Division, confirmed 104 have been taken into custody and 70 of them have been sent to the prison.

He said a total of 26 FIRs, including one by a Muslim, have been recorded based on the complaints received.

Asked why is it so that only one FIR has been lodged by Muslims, he said the minority community is not coming forward to give complaints for registration of a case.

However, locals alleged an atmosphere of fear has been created; and therefore, Muslim complainants are not going to police stations for registration for FIRs. They are afraid of getting arrested if they approached the police.

To strengthen their allegation, the locals referred to the demolition drive launched by authorities just a day after the violence.

“Majority of the shops and homes demolished in the last two days belonged to the community. The police have till now registered 25 FIRs on the basis of the complaints of the majority community, but we are struggling to get our side of the story heard by the cops. Those who want to register their FIRs are threatened and stopped,” they claimed.

But the allegation has been strongly refuted by the police, which argue that they are acting as per the law “without any preconceived notion”. “Whosoever is coming to us with his or her complaints, we are receiving it and converting into an FIR on merits,” said a senior police officer without wishing to be named.

The organisers of the Ram Navami tableaux claimed the tension spiralled out after the police partially barricaded the Talab Chowk area (the epicentre of the violence) and lathi charged the participants of the rally.

“We organise the procession on the same route (Talab Chowk mosque road till Ram temple) for decades, but no untoward incident ever happened. Neither we nor they (Muslims) have any problem with each other. It was the police, which disturbed peace this time,” said one of the organisers of the Raghuvanshi community-led Ram Navami procession.

He said following a heated exchange between the police and few leaders of the ruling Bharatiya Janata Party (BJP) over route of one of the processions that passed at around 12 noon from the Talab Chowk area spread out a rumour that the “Ram Navami processions had been stopped by the police in the Muslim-dominated locality”.

A call was allegedly given to assemble at the trisection at 3 pm to “save Hindus”. “Mishandling of the strong crowd and police lathi charge against them later resulted into the violence,” he added.

However, video footage of the incident describe a complete different story.

The participants of the processions can be seen holding posters of recently released The Kashmir Files with objectionable slogans such as “Jago Hinduon Jago” (wake up Hindus, wake up). Under the banner of Gauraksha Samiti — a joint banner of right-wing groups, which carried out over 15 tableaux, a huge crowd assembled at Talab Chowk for the second time at around 3 pm.

Provocative and anti-Muslim musics were blared out. The processionists stood in front of the mosque and waved saffron flags. The frenzy continued till 5 pm when stones-pelting began.

Though the district administration has chosen not to explain the reason behind the incident, eyewitnesses alleged the violence was triggered because of the objectionable songs and police inaction.

“Highly objectionable songs were being played out loud through DJ, with armed participants of the rally wielding swords and sticks and waving saffron flags,” said an eyewitness.

According to a low-ranking police man, who was stationed at Talab Chowk that day, said the organisers were asked to move ahead with their processions between 2-3 pm. But it did not happen. The rally stayed there till 5 pm when it was time for evening congregational prayers at the mosque.

Subsequently, sensing troubles, he said, a crowd of over 1,000 people assembled outside the mosque and the situation turned tense. The two sides finally began pelting stones on each other.

When stone-pelting started, Khargone Superintendent of Police Siddharth Choudhary, who was present at Talab Chowk, ordered a lathi charge to disperse the mob. Although the police managed to bring the situation under control there, dispersed mob unleashed terror in the adjoining colonies despite the use of tear gas by the cops.

DIG Singh said over 26 houses, 12 vehicles, five shops, a godown and several religious places were either vandalised or set a blaze. More than three dozen people, including seven police officials, were injured in the violence.

State Home Minister Narottam Mishra told the media in Bhopal a day after the violence that “the houses of those who are pelting stones will now be turned into a pile of stones”.

Hours later, Chief Minister Shivraj Singh Chouhan said that an unfortunate incident had occurred in Khargone. “Stringent action will be taken against the rioters and they will be made to pay for the loss of public and private property,” he said adding that the Prevention of Damage to Public and Private Property and Recovery of Damages Bill, 2021, was passed by the state government in December and a claim’s tribunal is being formed to recover the losses.

A day after Chouhan’s statement, the government issued a notification to form a ‘claims tribunal’ in Khargone which will be headed by a retired Judge.

Within two days of the violence, more than 32 shops and 16 houses belonging to Muslims were arbitrarily brought down.