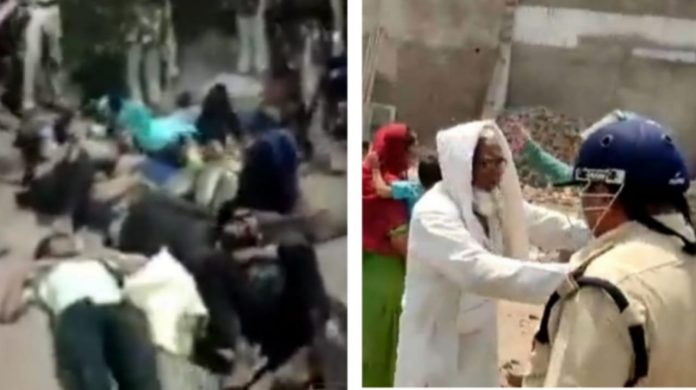 Bhopal (Madhya Pradesh)/New Delhi: With the arrest of at least 95 people (majority of them are Muslims), riot-torn Khargone town in Madhya Pradesh is still under curfew and an easy calm is prevailing in the region.

The violence broke out during the Ram Navami processions after locals objected to the provocative musics being played loud on DJ near a mosque at Talab Chowk.

The incident left more than a dozen of people, including Khargone superintendent of police, injured. Close to 10 houses and religious places were set a blaze.

What actually led to the violence

Eyewitnesses said the Ram Navami rally reached Talab Chowk at around 5.15 pm. There is a police post at the intersection and a mosque right in front of the post.

“Ram Navami tableaux were standing in a queue at this intersection. By the afternoon, almost all the tableaux had arrived there with around 12,000-15,000 people taking part in the procession. DJs were provocative songs in loud voices,” said a local.

He said the main tableau had not arrived yet; and therefore, all the processions halted there were getting delayed. Khargone SP Siddharth Chaudhary, who was present there, spoke to the office bearers of the procession committees and pursued them to start slowly moving ahead.

“The procession began moving ahead on the given route and passed the area peacefully. Another procession organised by the Vishwa Hindu Parishad and the Hindu Jagran Manch also moved ahead, but the organisers insisted that they would take an alternate route, which passes from inside the Muslim settlement on one side of the main road. The police refusal to allow them to change the route enraged participants of the procession. They began pelting stones on police personnel,” he continued.

It was time for namaz (prayer) and azaan (a call to prayer) was made for the congregational prayer from the mosque. Therefore, people Muslims were also gathered at the mosque.

“Few stones also landed at the mosque. It agitated the Muslim crowd, which also retaliated,” said another eyewitness.

“We brought the situation under control in 15 minutes by firing tear gas shells and resorting to mild lathi charge,” a senior police officer told Muslim Mirror.

The procession was once again made to move ahead slowly.

“This whole area is surrounded by dense settlements. In some localities, Hindus and Muslims live together. Some settlements are Muslim majority, while the others are so cramped that even four wheelers cannot go inside,” they said.

Both communities came face to face in Sanjay Nagar, where there was heavy police presence. A police team led by the SP Siddharth Chowdhary reached there and lobbed several tear gas shells to clear the crowd on both sides.

“The crowd had retreated a bit. But by the time the police reached the mob had torched several houses and shops belonging to Muslims,” they said.

It was seven in the evening and dark. Hindus and Muslims once again came face to face near the mosque at Talab Chowk. Taking advantage of the darkness, someone from the crowd fired at the SP who was shot at his leg.

“I got shot in the leg. At first I thought it was a stone. I had trouble walking, so I stood on the side. Later, I realised it was a gun shot injury. There was an excessive bleeding. I began shouting. It was necessary because every street leading to the trisection was crowded. There were 300-400 people on one side, while the other side had 400-600 people. Meanwhile, an additional police force arrived at the spot. My gunman was also hit with stones. Blood was pouring out of his head. Despite being injured, he took me to the hospital,” said the top cop.

Locals alleged there was a bigger plan, which could not be executed properly. “The SP was fired at with the help of desi katta (locally made pistol). Had the bullet hit the police officer on the target, the onus would have been put on Muslims and a large scale crackdown launched against the community,” suggested the conspiracy theory.

He said some of the accused owned the properties.

Locals dubbed the police action “biased” and “one sided”. They said it was carried out without any investigation. “Dancing on the tune of their political masters, who are leaving no stone unturned to oppress Muslims, the police are acting like a prosecution as well as a court,” they alleged.

Asked why did the police not wait for a court’s judgment before demolishing the properties of the alleged rioters, Khargone District Collector P Anugraha the buildings were illegal and had been constructed on “encroached land”. “Notices had been served to the owners six months before the demolition drive,” she told Muslim Mirror.

Asked about the allegation of targeted action, she rubbished it and said, “The properties that were demolished belonged to both communities.”

Of the 12 shops demolished at the Talab Chowk area, eight belonged to Muslims and the rest four were run by Hindus. All 12 shops were properties of of the Jama Masjid committee.

She said the administration is still investigating as to what exactly triggered the violence.

Attempting to retrieve little he could outside his demolished shop of scrap, 50-year-old Mohammad Rafiq was clueless as to why his business establishment was demolished.

“I have nothing to do with the violence and it’s perpetrators. The guilty must be punished. But why was my shop demolished? What was my crime? How will I make ends meet?” he asked, with tears rolling down his face.

A grocery Rafiq’s shop, Suresh Gupta had his grocery shop, which was also raised. He denied receiving any notice as claimed by the district collector.

“I had taken the shop on rent from the mosque committee, which has not got any notice. Had it got anything from the administration, the management would have shared with us. I came to know about the demolition when bulldozers had already arrived. I rushed in and could save whatever I could do in the little time,” he added.

Indore Range DIG Tilak Singh confirmed that 11 FIRs have been registered and 95 people have been taken into custody in connection with orchestrating the violence.

Asked what triggered the riots, he said, “Investigations are underway.”

Locals said all the 11 FIRs that have been registered are against Muslims. “Not a single complaint lodged by Muslims have been converted into an FIR,” they alleged.

However, the claim could not be verified as the authorities declined to make any comment in this regard.

Calling the violence in Khargone “unfortunate”, Madhya Pradesh Chief Minister Shivraj Singh Chouhan tweeted, “There is no place for rioters on the soil of Madhya Pradesh. These rioters have been identified, they will not be released. Strictest actions will be taken against them.”

He further said all damages will be recovered from them (the alleged rioters) after an assessment of the damage to public properties.

Khargone and its neighbouring two districts are dominated by tribals who are faced with a number of problems such as their persecution by authorities, starvation, malnutrition, poor health infrastructure and livelihood. Despite this, the breaking out of a communal riot in the region indicate their saffronisation and misplaced priorities.

Interestingly, Opposition, the Congress, is also seemingly not ready to take any risk to vocally condemn the incident. Analysts say the grand old party cannot afford to go against the dominant majority sentiments as the state will go to polls the next year.